Album Review: On The Road by Carl Moorcroft (by Emma Prew)

Carl Moorcroft is a musician from Liverpool, who like many before him started out in a punk (or ska) band before going it alone. He’s already made a name for himself in and around Liverpool supporting the likes of Random Hand, Roughneck Riot and Billy Liar, and has just played Rebellion Festival. He released his debut 8-track album on Antipop Records earlier this month. 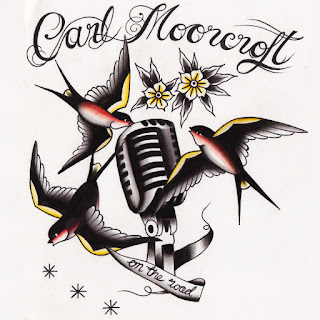 On The Road kicks off with a track of the same name. The song starts with some loud and rhythmic acoustic guitar strumming, it sets a good pace for the rest of the song especially when the vocals begin with a similar rhythm. You can hear his background in ska punk in the way the chords are strummed, although it’s subtle. The song is about listening to your head over your heart and doing things how you want to – ‘Now I keep on walking, I do everything my own way, A fresh new start begins today.’

The second song on On The Road is called Tea Or Coffee and it feels like an acoustic anthem from the outset. With the affirmative lyrics ‘Say it again because I won’t back down, You can feel the music in my soul, I’ll play my songs, I’ll keep on singing’ not only starting the song off but also becoming the chorus Tea Or Coffee is a very positive sounding song. More so than in the previous track, you can hear hints of Carl’s accent which is never a bad thing in my mind – adds character!

Today is the third song on the album and it is a love song full of emotion. You can hear intensity of Carl’s feelings both in his vocal tone and in the lyrics. ‘So long as I can be there for you, Wherever you are I will be there.’  There’s nothing overly technical in the guitar playing of this song but there really doesn’t need to be when the focus is on the vocals.

Next up is a fast-paced track called Judgement. The song is the shortest on the album at just over 2 minutes long and switches between guitar with vocals and just guitar – like the guitar has its own verses. The lyrical contents is, of course, about judged by others – ‘Can you feel the eyes that burn in your back, Can you live with this?’. There are actually very few lyrics in the song as they are mostly repeated but with the guitar-only interludes as well this makes for an interesting song.

Deep Fried is another heartfelt and emotion-fuelled song about feeling that you’re being lied to or having something hidden from you. Like many of the songs on On The Road, Deep Fried is a very personal song. It’s also a more negative-sounding song than some of the others but I find it’s the more negative songs that often connect with people the best – as it lets the listener know that they are not alone in feeling a certain way. ‘We were already damned from the start, Don’t give me answers, There’s nothing to tell me’.

Deep Fried is followed by another love song, For You. The guitar playing takes a backseat in this song while Carl sings his heart out. You can hear the pain in his voice as he sings about knowing you can’t fix a broken relationship, despite how you might try – ‘Scared ’cause I know I’m losing you. Losing you…’. The lyrics really stand out in For You with the song ending on the question ‘Would I do anything for you? For you.’

The penultimate track on On The Road is titled All About Me – quite a contradiction to the previous track. It’s a song about the mistakes that you make when you drink too much and/or say the wrong thing to someone that you care about. The chorus has a very sing-a-long-able nature to it which makes me think that this song could be a live favourite – ‘All about me, Where every dream I dreamt was you, Every word you say will always end in I love you’.

Reckless is the eighth and final track on the album and it seems as if Carl saved the best for last. The song is fast-paced, catchy and uplifting. There is a definite hint of ska guitar mixed in with the more typical acoustic punk sound, though all played on an acoustic guitar. If there’s just one song that you listen to from On The Road, make it this one – although you should listen to the whole album, obviously!

You can like Carl Moorcroft on Facebook here. And find him on Bandcamp here.
Posted by Emma Prew at 11:03:00