RxR are a four piece are a melodic acoustic pop punk band from Ruislip lead by Dan Peters. It started as a solo act under the moniker Red Rag Front. Over time Dan has formed the band that has morphed into RxR and recently, after what seems like an age, they released their debut album titled Fallout 5 through the Tiny Little Creatures Recording Company. 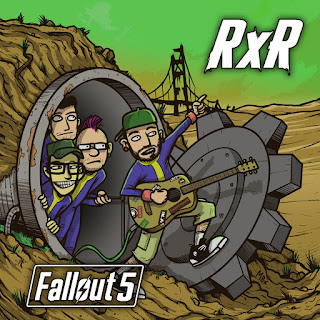 The twelve track album begins with the song All These Things. Starting out with a fairly lengthy guitar intro you instantly get a feel of the sound that RxR are going for on this album. There is a big hint of 1990s skate punk in the guitar work, especially Face To Face. Having only previously heard Dan's vocal on acoustic tracks I was pleasantly surprised by just how good it is with a full band backing him. The shackles are off as he belts out the song with a gruff yet melodic style of singing. This is followed up by Plus One. This track begins acoustically with Dan singing before the track goes KABOOM! and explodes into a full speed ahead punk rock jam. It's a love song about falling for someone and feeling complete because of them. The chorus is instantly memorable as Dan, with some help from Kingly Hangdog of Müg, sings "You Make Me The Happiest Patriarch In The World." 99% is a standout track on Fallout 5. Combining fast paced pop punk and a small dose of ska, the track has energy sweating out of all of its pores. It's a song that you can't help to at the very least nod your head to. This song allows RxR to show some versatility with their sound which is something I always enjoy any band doing. It's all well and good finding a sound that works and sticking with it but unless you are The Copyrights the listener will get bored by the end of the album. Variety is the spice of life as the old folk say. Life Is Better is another track that begins with just acoustic before the full band come in. I loved the opening section of vocals with Dan trading lines with song gang vocalists including Jordan Harris from DropThis. All these guest appearances show how united the UK underground punk scene is and it is fantastic to see.

The fifth song is named Bad Religion. Obviously this is a anti-religion song. I love that sonically it's also an ode to the legendary Bad Religion. All it really needs is some "Ooozin-Ahs." Bad Religion really need to add a bit of acoustic guitar to their sound. Musically the track is played hard and fast, only slowing to build towards another explosion of punk rock brilliance. More brilliant guest vocals from Jordan Harris are included as well. The Best takes us to the halfway point of Fall Out 5. This track falls more towards the melodic side of the RxR musical spectrum and feels very reflective. It's about being a parent and loving watching your child grow into the best person they can be. I really love the line "You're Making Me So Proud I Hope You're Proud Of Me." There's something really touching about it. The second half of the album starts with an Interlude. It's just a short but enjoyable acoustic guitar solo. On the digital version it did feel slightly out of place but I imagine if you were listening to it on record it is a good introduction to the second half. Up next comes Fighting My Way. This wakes the album up in a big way. At only one minute and forty-eight seconds long, it's a short and punchy pop punk number about struggling to find your way towards someone who is seemingly a long way away. Fighting My Way is another track overflowing with an infectious energy, something that RxR do ridiculously well.

"What Did I Do To Make You Love Me? I Don't Know But I'm Fucking Glad It Worked, I Don't Know What The Future Holds But I'm Motherfucking Glad You're Gonna Be There" is the wonderful way we are introduced to the song Dead Cats. Those lyrics along with a simple drum beat really give the introduction of this song a fresh and exciting sound. I think you can guess what the song is about from those opening lyrics so there isn't a lot of point me explaining. There is a fun, bouncy element to the sound reminding me of Drive-Thru Records heroes Allister, just a lot rougher round the edges. Sink Hole is a bit of a change of gears musically and topically. This is a stripped back RxR featuring Dan and his acoustic guitar. I'm glad that the decision to include a old school Red Rag Front style track on the record was made. I'm all for acts evolving but it's also nice that they don't forget where they came from. This sombre acoustic number is followed by a track that immediately made me think of Pennywise. The opening guitar on penultimate track Proving Me Wrong could be a riff that Fletcher Dragge has been playing for a couple of decades. There's nothing wrong with that though, Pennywise are legends in the punk world and have influenced a lot of bands during their career. The song relies heavily on its chorus of "Proving Me Wrong Woah-oh-oh" to hook the listener. And hook the listener it does. You'll be singing along with the song during the first listen, that's just how catchy the chorus is. The final song, Minus One 3 sees the electric instruments put down and a ukulele introduced. Not something I was expecting at all. It's a song about the unbreakable bond that you have with a best friend. It's a short little song and a fun way to finish off a fantastic debut album.

Fallout 5 is the result of two years of work and is something that Dan and the rest of RxR should be extremely proud of. If you haven't checked out this album yet then what are you waiting for? Do it! Do it now!