Album Review: Low Bridge, Everyone Down/Home Is Where They Take You In Double A-Side by Franz Nicolay 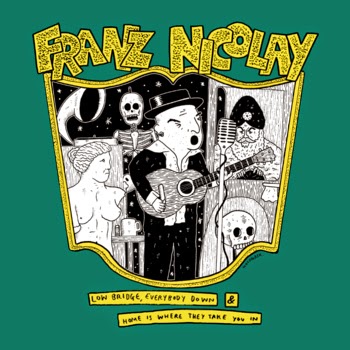 After playing in The World/Inferno Friendship Society and The Hold Steady New York based Franz Nicolay has built a reputation as one of the best session musicians around having contributed to releases by Frank Turner, Against Me!, The Loved Ones and The Slackers. He has also had a very successful career as a solo artist with his newest album To Us, The Beautiful being released in January through Xtra Mile Recordings. This March he is embarking on a UK tour to support the album and has put out a new Double A-Side on Make That A Take Records, featuring two brand new non album tracks that were recorded during the album sessions. I gave it a spin.

The first thing I noticed on the first track Low Bridge, Everyone Down is the rawness of it. It instantly gives you the image of seeing it played live in some dark, dingy, but wonderful room where Franz will have everyone in the room’s undivided attention. The song feels dark as Nicolay’s booming vocals carry the melody throughout. I loved the musicianship throughout, the drums, bass and guitar all seemingly doing their own thing but coming together brilliantly.

The fantastically titled Home Is Where They Take You In is a more conventional sounding song. The country/folk sound makes the track instant toe tapper on the very first listen. His vocal is again captivating and gives you a feeling of been told a story throughout. The song is about finding somewhere to belong by the people you surround yourself with rather than the four walls that surround you. Despite only being just over two minutes long the song feels like it’s in two parts and has a fantastic musical segment in the middle which builds towards the second verse.

This is a fun little release from an extremely talented individual. A brilliant way for new fans to get into him and an excellent addition to any long time fans collection.

Now listening to We Did It For The Don (Acoustic) by Against Me!
Posted by ColinsPRW at 10:41:00