Album Review: When The Day Is Done by Territories (by Chris Bishton)

Members of Territories have been playing together for many years. Although the band only formed in 2015, they came out of Canadian street-punk band Knucklehead when they decided they weren't done playing together after they split. They needed a rename in order to reflect the new direction – fiercely melodic, anthemic punk – that they were now set to play.

It led to the new band and now this 10", six song EP When The Day Is Done – the latest release as Territories after their S/T debut album in 2018, along with a few follow up singles. 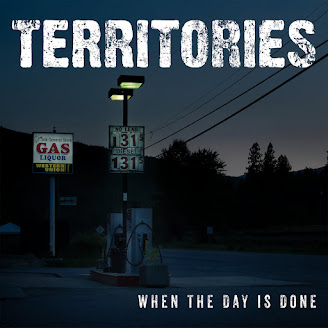 The first song is Second Son. There's some Bouncing Souls influence in there, obviously always a good thing, but then there's also evidence of their street-punk sound from their Knucklehead days. It's catchy and energetic and picks up perfectly from where the debut album left us.

The second track is Defender. This was always a favourite song of theirs for me. It was already released as one of the aforementioned singles last year, so I'm already familiar with it and hearing it again, it sounds so good. The song is soft, but still fast and gritty enough to have that punk edge with singalong harmonies. SOS then wraps up the first side.

The first song on the second side is The Lockdown. You'd obviously be forgiven if you assumed this was going to be about COVID and the associated closure of swathes of shops, businesses, music venues etc. But it's not. It's about the drills kids do when there's a mass shooting at a school and a call to end gun violence.

It's a chilling subject and a brilliant song. For me, it has a kind of Americana vibe to it, something that seems appropriate since most associate mass shooting tragedies with the US. There's clear lyrics here, painting a picture of kids being told to stay away from windows, turn off sound from phones and not make any noise etc. The repeated line "the kids say no, the lockdown's gotta go" remains in my head hours after listening to it.

The penultimate track is Welcome Home. Lots of harmonies and opportunities for singalongs in this, before concluding with Quit This City, another I'm already familiar with as it was previously released as a single. It's a cracking way to end, not least as it's about getting away and having a new start, before it's too late – a subject so many of my friends have mused about these last few months since lockdown (the COVID one, not the mass shooting one).

They haven't released an enormous amount of stuff because they're still a pretty new band, but I really love Territories and this EP is as good as everything before. I hope the inclusion of a few songs that had already been released was just to bring some of their more recent songs together. Even more so, I hope it means they've got more songs in them that will result in a new LP sometime soon. I've got my fingers crossed.
Stream and download When The Day Is Done on Bandcamp here.
Like Territories on Facebook here.
This review was written by Chris Bishton.
Posted by ColinsPRW at 11:25:00