Album Review: In Your Face! by Radio Blast

Radio Blast are a four piece Ramonescore pop punk band who formed in 2018 in New York. Influenced by the likes of The Huntingtons, Young Rochelles, Isotopes, Dan Vapid, Jagger Holly and Dee Cracks, the band have had a productive two years. Firstly releasing their debut EP Let’s Rock in May 2019 and then releasing their second EP In Your Face! in August 2020, along with a handful of singles squeezed in between. Today I’m reviewing that new EP In Your Face! which was released by Mom’s Cellar Dwellers. 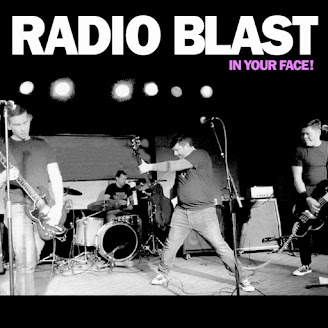 The EP begins with the title track In Your Face. This opening song is a great introduction of what to expect from Radio Blast – fast buzzing guitars, pounding drums and wonderfully snotty vocals. In true Ramonescore fashion, it’s brilliantly simple with a blunt and to the point style that allows the song to get stuck in your head. There’s also a great cameo from Rev. Norb of Boris The Sprinkler doing a voiceover that I thought was fantastic. The second song is named She’s A Cannibal. It’s a super serious and deep song about getting invited over to a girl’s house and realising too late that she’s quite partial to eating people. This is a powerful song that I found deeply moving. It also put a massive smile on my face and I quickly found myself singing along and having a little dance on my chair whilst listening and reviewing.

Radio Blast released the third song Boy With The Six Pack as a single in the build up of the release of In Your Face! The song is actually quite a sad song about being young and feeling the pressure of everyone’s high expectations, in this case being the high school quarterback and everyone counting on you to win the big game. These expectations eventually lead to the quarterback becoming depressed, staying in his basement and not wanting to come out. The final track is titled Teddy. This is another song that references sport, this time ice hockey. I must admit that 99% of my knowledge of ice hockey comes from watching The Mighty Ducks (best trilogy ever) so I’m not sure I get all the references but that didn’t stop me really enjoying the song. Radio Blast have a great skill in writing simple pop punk tunes that are incredibly infectious. I love it.

In Your Face! is a great showcase of a new band playing homage to a much loved genre of music. I feel like Ramonescore is becoming a more and more niche genre (particularly in the UK) so it’s always fantastic to discover new bands still keeping the genre alive.
Stream and download In Your Face! on Bandcamp here.
Like Radio Blast on Facebook here.
This review was written by Colin Clark.
Posted by ColinsPRW at 11:54:00