I’m throwing this statement out there now, Edinburgh indie punks Paper Rifles have been the busiest band during the COVID-19 lockdown. Not only did they manage to play a load of acoustic shows online, release an EP and record a covers album, they also found the time to release their second full length album Traitor’s Hill. We’ve been following Paper Rifles pretty much since we started CPRW when Jon performed as a solo act before eventually becoming a full band and they seem to go from strength to strength with every single release. I was expecting some big things from Traitor’s Hill. 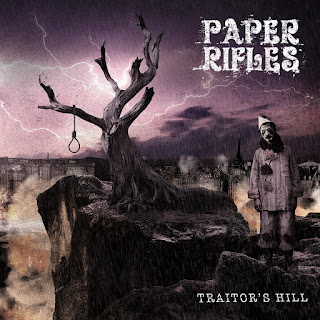 Traitor’s Hill opens with The Greatest Change. The track starts in an eerie manner with a really long keyboard note before Jon’s solemn vocals come in. As the song goes on it builds wonderfully, starting with some pounding drums and then guitars. Jon’s vocals get louder and more passionate as the song continues to grow. The track is obviously about making a change in your life, whether it’s because of things that you’ve done wrong, stepping away from a bad relationship or even taking steps to move away from everything you know. Up next is Sleeping Dogs. Here the band take that big sound from The Greatest Change and really up the tempo. To my knowledge this is one of the heaviest sounding songs Paper Rifles have written so far, there’s a real crunch to the guitars that I adored. Sleeping Dogs is about trying to decide whether or not to try and make a positive change in a situation or just leaving it be in case you make it worse. The third song, It Started As A Joke, was released as a single with a fantastic video in the run up to Traitor’s Hill’s release. Slowing things down to a more traditional Paper Rifles tempo, this is where you really get to hear the strength of Jon’s voice. I’ve found it captivating since I heard it all those years ago and it continues to blow me away. The final verse on the track is the big highlight – it really had me wanting to sing-along with my fist passionately in the air.

Blood On The Wind had me thinking of Hot Water Music with its deep guitar tones and melodic vocal delivery. If Jon had a booming gruff voice like Mr Chuck Ragan, this would be like listening to a track from Caution. On Blood On The Wind the band sing about how the people who are supposed to be in charge use their position to only benefit themselves and their friends whilst the people who really need support struggle and often die because of this. The fifth track on Traitor’s Hill is Sea Legs. There is a melody in this song that reminds me of something else and it’s really bugging me what it is. (It might be It’s Raining Men by The Weather Girls.) For me, this is perhaps the poppiest track on the album so far and it offers a nice contrast to the previous song. This doesn’t take away from the serious tone of the song though, as Jon puts in another emotive performance – there are sombre moments, angsty moments and moments where his vocals sound huge. I absolutely loved James’ drums at the beginning of Hearts And Minds. It’s a simple, repetitive beat that’s extremely striking and grabs you immediately. Like with many Paper Rifles songs, it builds and grows as it progresses before hitting a big chorus that you’ll be yearning to sing-along with. This is one of those songs that has loads of little subtleties that you’ll be discovering with each and every listen. Judas is potentially my favourite song on Traitor’s Hill. Bringing the tempo back up, it’s a rousing song from start to finish. It’s an upbeat and passionate song where Jon questions himself about whether he’s sold out from his beliefs from when he was younger or if he’s still the same person he once was. There’s a punchy approach to the vocals that make the song a real ear worm from the beginning and the chorus, with additional vocals from guitarist Kev, is something I look forward to seeing live when we’re allowed to do that again.

The eighth song, Headstrong, originally appeared on the Headstrong EP that was released in April. The Headstrong EP was released to help raise money for Health In Mind which is a Scottish charity that helps to promote positive mental health and wellbeing. As you might expect, the song is about dealing with mental health problems, particularly as a man where you are often raised in an environment where you are not allowed to show emotion and are forced to bottle things up. I’m sure the song is extremely cathartic for a lot of people listening to it. The penultimate song is Cemetary Sea. The song is originally by Jon’s previous band The Curators but also appeared as an acoustic version on the Politics EP in 2014. Paper Rifles seems to have given the song a fresh coat of paint and it sounds incredible. I loved the suspense-building guitar that leads into the driving second verse before the song really explodes into the chorus. The structure of this song is exactly what I love in a punk rock song. Traitor’s Hill is completed with the song Atlas. This feels like a new direction for Paper Rifles as they venture into an angsty and even, at times, grunge-like style. Starting out in an atmospheric and moody style, Jon goes for some higher notes than anything previously done on the album. This adds to the whole moody atmosphere they seem to be going for on the song. Of course, over time there are more and more layers added to the song and it takes you on quite the ride. This is an absolutely stunning way to finish the album.

Paper Rifles are one of Scotland’s very best bands and seem to get better with every release. It’s not just the songs that are brilliant but the overall sound and production of the album is fantastic. This was all done by the band’s drummer James at his home studio and is extremely impressive. I’ve been telling people about how good Paper Rifles are for years now and hopefully Traitor’s Hill will make even more people take notice.
Stream and download Traitor’s Hill on Bandcamp here.
Like Paper Rifles on Facebook here.
This review was written by Colin Clark.
Posted by ColinsPRW at 12:28:00