I first became aware of Seattle's Burn Burn Burn! after discovering them on a split EP with South Korea's ...Whatever That Means titled Blowing Minds And Melting Faces. Since then I've kept an interested eye on the band's career. This past February the band released a brand new full length named Chosen Family. Chosen Family is co-released by Asteroid M Records, Tiny Dragon Music, Bypolar Records, Stars At Night Records and No Time Records and features twelve songs of a genre I'm calling chaotic pop punk. 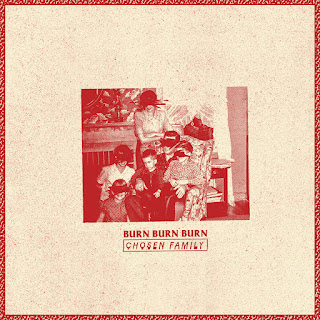 Chosen Family begins with Top Shelf. After a distorted feedback-y opening we move into a rumbling bass line before the vocals hit. These are the sort of punk vocals that I really love. They’re quite rough around the edges, the sort of everyman style that gives a song an accessibility and a feeling that we're all in this together. Vocally it gets even better though with the addition of a second vocalist, harmonies and gang vocals - all my favourite things! The song is about wishing that the person you love would believe in you and the disappointment that comes with that. Up next is Catharsis NOW! The intro allows the vocals to take centre stage, letting the listener get a sense of what the song is about – questioning yourself, wondering if you're okay and letting it all out. The track follows a structure of slower verses and high tempo choruses that really get you quite pumped up. Despite the structure, there is still a feeling of anything could happen and this gives the song plenty of energy. The third song is named Gold Chains And Party Shirts. What I really enjoyed about this song was the increased intensity and urgency that Burn Burn Burn! display. The song sounds more controlled than the previous tracks which gives the track a bigger sound. It's about struggling through life and realising that you’re not getting anywhere, debating whether or not you should give up. Sharks is the name of the fourth song on Chosen Family. Sharks sees Burn Burn Burn! venture into more of a street punk sound. There's a bit more of a snarl in the vocals and the gang vocals will have the crowd singing along loud and proud. Shark is about a woman in Seattle who is strong and independent, being happy to be an outcast and comfortable going out for exactly what she wants. This is one of those songs where you can really imagine what a music video might be like for the song.

Road To Ruin is a slower song that's filled with gang vocals. The first half of the song almost feels like a chanting session that will no doubt get a passionate live crowd heavily involved. When you get to the point of thinking that the entire song will go along this road the band shift things and the song finishes in a rambunctious manor. The song is about the mistakes that you made when you were younger and how they affect your life now. The sixth song, Fugue State, sees Burn Burn Burn! really pick things back up with an almost hardcore style song. Vocally the song is much heavier than anything so far, giving the impression that the band are so pissed off. This is backed musically, with some pounding drums and buzzing guitars. At the end of song we even get this harsh primal scream that leads into the next song, Nautical Star Fuckers. I enjoyed the two part feel of the song. It gives the whole album a really explosive kick. On this song Burn Burn Burn! take aim at the United States Navy who dock in towns and go out and act terribly, going after women and looking for all sorts of trouble just because they think they're entitled to act a certain way. Really not cool. I like that the band tackle this topic as it's one that I can relate to, growing up in an army town and seeing this behaviour first hand. On my first listen through of Chosen Family, 20th & Hendo was the song that really stood out. Packed with an infectious energy due to the punchy rapid fire approach to the vocal delivery, it had me bouncing along quickly. The song is about appreciating your best friends and knowing you don't need anything else so long as you have your pals. I loved the positivity on this song and it had me thinking of my group of best friends and how lucking I am to have them. This song put a huge smile on my face.

The Boy Who Cried Love is another fast paced and energetic track that also packs quite the punch. It's about pretending you love anyone just because it's too hard to be alone. The guitars and drums really give the song its kick – played at a blistering speed, they don't seem to relent throughout the entire track. There are some great riffs that freshen up the sound as the track goes on. My Old Self is a rawer sounding song with the band in reflective mood. The band’s lead singer talks about trying to be a better person but having to stop from doing things you would have done in the past. This is one of the more emotional songs on Chosen Family and that really comes across. It's also another really relatable track for 30 something punks thinking about the old days and the really stupid things they probably did. The penultimate song is named Hold. Hold is a mostly acoustic track, showing a softer side of Burn Burn Burn! The horn gives it a folkier feeling, that is until a change in the intensity of the vocals bring in the full band, filling the song out a bit. This wasn't something I really expected at this point on the album but it's one of the standout tracks on an album full of great songs. It sees the band in storytelling mode as they speak about all the things you want to do with someone you love and holding on to that feeling. This is a really sweet song. Chosen Family is finished with Nemesis House. Beginning with an extended intro that builds the song up to the point that when the vocals hit you're ready to explode with the band. The opening verse features my favourite lyric on the whole album – "I see you more at Shorty's than I see you at the show, and when I do it's just the big ones, it's a sorry overtone." This is a song about catching up with old friends who now live very different lives to you, again that's something that I can really relate to. This is another really, really good song that I absolutely loved and it was a perfect way to finish up Chosen Family.

I was so impressed with this album. It doesn't really stick to any real formula other than being really relatable throughout. It's full of this energy that hooked me throughout the entire twenty-nine minutes of the album. That's something I always look for when listening to a new album, does it get me pumped up and excited? Chosen Family certainly does that. If you're unfamiliar with these guys, you need to check this album out. It's fantastic.

This review was written by Colin Clark.
Posted by ColinsPRW at 12:15:00