Album Review: I Might Drink Myself To Death by Our Souls

Our Souls are a new band on the scene featuring previous members of old bands you've never heard of. I doubt at this point you have actually heard of Our Souls given that at the time of writing they only have 47 likes on Facebook. This is exactly the type of band I love though. Insanely good and a very well kept secret. In November 2018, the five piece released their debut EP which is titled I Might Drink Myself To Death. This was love on first listen for me. Energetic melodic gruff punk – something that is very far up my street. 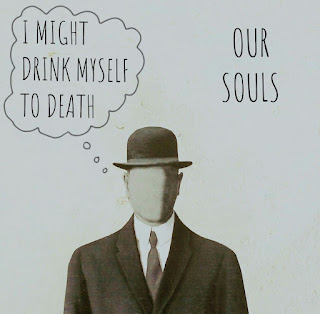 I Might Drink Myself To Death starts with the song 45. Beginning with some fantastic duelling guitars alongside a rapid drum beat, things really get off to quite a start. It's not even a long intro but there's something about that opening that had me itching with anticipation to sing those opening lines of "a rare ray of light, renewed hope? oh I don't think so." The tempo is exactly how I love this style of punk rock to be and this opening has me so excited to hear the rest of the EP. The second song is named This Is In G, This Is For The Hustlas. It's a song dedicated to those people stuck in limbo in their lives, not knowing which way to turn and longing to do something productive. The energy from the first song carries over to this one and is just a song that needs a great big sing-along. The chorus is one of my favourites I've heard in a long time with the use of gang vocals really making it sound massive. The words "I tried writing, I tried booze, I tried running, it was no use, I did needy, failed at aloof, I keep talking, it's no use, I keep thinking it's no use" quickly wormed their way into my head and my heart.

Another Five Days sees the more ferocious side of the Our Souls sound. It's verging on a hardcore track and I love it. It's about being sick of your job and longing for the weekend. I loved the line at the end of each chorus where lead singer Ian shouts "I don't wanna spend my whole life making someone else's wealth." Of course, with this angrier side of Our Souls, the energy goes through the roof! The penultimate song Gundrug shows Our Souls showcasing a less is more style. It's a forty-three second song where the band go off like a race car as they blast through a song about America's ridiculous gun laws. In the song, the band plead with America to just give up their guns and liken the need to have one to an addiction. I particularly enjoyed the lyric "because a gun for fun is for a fucking moron." I Might Drink Myself To Death is finished with Post-Funny. After such a short song, we're now treated to a four minute track that showcases a slower and more melodic side of Our Souls. This slower style gives the song a bit of a story time feel that gets you engrossed in the track. The song does a great job in doing that thing that I think all final tracks on albums and EPs should do – sound absolutely massive. The song builds brilliantly towards the end but instead of exploding for the finale it then begins to fade out which I thought was a great way to finish things up.

I was so excited by this EP that I quickly shared it with the CPRW team as well as Sarah Shout Louder and Paul Be Sharp. It's a superb debut that had me seriously hyped from start to finish. There's not much I love more than when a band appears as if from nowhere and delivers something so brilliant. Go and check out Our Souls and jump on board so you can be that smug so and so who can say "I was a fan from the start" when they begin to explode. They will explode.

This review was written by Colin Clark.
Posted by ColinsPRW at 11:57:00