Any announcement of new material by Long Island DIY punk legends Iron Chic was likely to be greeted by two things; great excitement and great trepidation. Whilst the band have consistently over delivered it’s only added to increase expectations. Coupled with the departure and subsequent passing of founding guitarist Rob McAllister, it's fair to say the process of getting a new record out has not been straight forward... however if one band can deal with such turmoil it's one whose only thing bigger than their choruses is their hearts. In typical fashion they have poured everything into "You Can’t Stay Here", which exorcises many demons and signals a triumphant return in their typical explosive fashion! 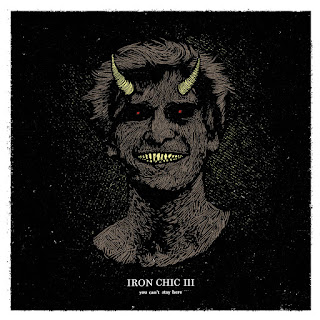 Everything you would expect to hear from Iron Chic is present; the album is loaded with gang vocals, 8-bit sound effects, pop culture references and scientific theory song-titles. In fact despite the 4 years since "The Constant One", Iron Chic have firmly retained the formula that has served them so well previously. The changes more subtle than full-on revolution; tweaks to the sound as opposed to any major departures. Whilst in some places that may seem like a bad thing, Iron Chic 2017 sounding like Iron Chic 2008 is certainly not.

The opening salvo of “A Headache with Pictures” and “My Best Friend (is a Nihilist)” set the tone for the album perfectly. Sure it’s familiar territory for anyone with a passing interest in the band; lots of “Whoa-Whoa’s”; static background noise and massive gang-vocal choruses. But there is also a more subdued, reflective tone to Jason Lubrano’s lyrics; at times the feelings of defeat and helplessness permeate through the upbeat music to lay bare the emotion of the band; it’s almost as if the music is a mask they hide their angst behind. Certainly this creates a feeling that it’s a more personal collection than some of their previous efforts and given the challenges faced over recent years it’s no surprise to see it rears its head in such a way.

The title track “You Can’t Stay Here” closes the opening quarter with a claustrophobic dense emotional song driven by a repeated refrain of the title over and over. There is a guilt and hopelessness around the song. It feels isolated and dark compared too many of the other songs on the album. In fact this approach of “up-beat” songs closed by a more reflective one provides much of the structure of the album with “Golgotha” and “Ruinous Calamity”, providing the other markers with which the album is punctuated. This approach helps create an emotional flow to the album and feels deliberate; almost as if it’s a representation of the cycles of grief and emotional turmoil the band have faced over recent times. What aids this in succeeding is the quality of these slower songs, think “Bustin’ Makes Me Feel Good” or “A Serious House...”. The inclusion of three such songs is probably the best reflection of the subtle development they have undertaken. It helps with the narrative and as a result creates a more nuanced balance to the album as opposed it feeling very one paced and one dimensional. Of the three, “Golgotha” is probably the strongest – starting very subtlety, almost lullaby-esque before building defiantly to a rousing, layered conclusion, dragged along by Gordon Lafler’s drumming.

Notable for their ability to create huge sing-a-long anthems, there is plenty for a casual listener to pick up here as an introduction to the band. “Profane Geometry” is typical of the band’s sound; feeling immediately familiar, where as “Invisible Ink” has the kind of Iron Chic lyrics that made Facebook page Pictures of “Cats with Iron Chic lyrics” so popular; “spent the night face down on the floor, gasping for air, until we can’t anymore” should be easy for a feline fan to knock something amusing together for the page!

Despite all of these aforementioned songs being excellent, Iron Chic even manage to commit three truly stunning tracks to the album – “Let’s.Get.Dangerous”, “Planes, Chest Pains and Automobiles” and “To Shreds, You Say?”. All three are near perfect; insanely catchy, these are the kind of ear worms bands dream of writing and I dare say the ones long-time fans will be clamouring to hear played live, sung along with full voices and half empty beers. Closing track “To Sheds, You Say?” is the perfect culmination of the emotional rollercoaster of the album. If the journey to it takes in the range of human emotion, it’s the acceptance and defiance of moving forward. “It’s been a long hard year, it started hard but ends in tears... Are you done with me...” sums up everything the band have articulated through the previous 10 songs. It’s certainly the most raw and angry track but brings with it its own optimism; when Lubrano sings about holding on to the memories of the best years of your life, it’s so heartfelt and sincere you can’t help but be stirred by it!

Overall “You Can’t Stay Here” is a monumental triumph. If both previous albums built a loyal almost rabid fan base, this deserves to take them to a much wider audience. In most cases I’m assuming anyone reading this will most likely already have the album; if not immediately get hold of a copy; lock yourself away for the afternoon and get lost in the finest 30 minutes of music you’ll hear in a long time!

This review was written by Richard Mair.
Posted by ColinsPRW at 12:49:00