My favourite Californian sad punk rock band Spanish Love Songs made an excellent return in October with their first release since 2015's debut, Giant Sings The Blues. I couldn't stop listening to the aforementioned debut album – although I was almost a year late to discover it – and so was keen to hear more from the band when it popped up out of the blue on my Spotify. Released just before the band played Fest 16 and to coincide with a run of dates with the UK's own Ducking Punches, Buffalo Buffalo is a three track EP and here's what I thought of it. 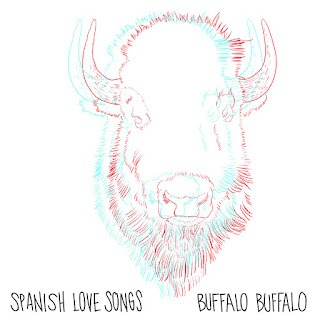 The first track is also the title track, Buffalo Buffalo, and kicks off with some big melodic guitars that sound like a slightly poppier Menzingers. The Menzingers are a band that Spanish Love Songs seem to get compared to a fair bit judging by their reviews on Bandcamp and musically I can see why but the lyrics and vocals are something else. There’s something about Dylan’s self-deprecating lyrics yet amazing voice that I can’t stop listening to and I’m happy to say this hasn’t changed with this latest EP. In faithful Spanish Love Songs style, Buffalo Buffalo has an excellent chorus that you’ll be wanting to sing along to until your voice cracks – ‘Would you meet me in the middle? Would you meet me north of Buffalo? Escape into the winter, Build a house where no one wants to go.’  This is a song about wanting to run away to get away from everything that’s getting you down, except maybe having just one person with you. The one person that you can be yourself with.

Next up we have The Boy Considers His Hair Cut, which has great bit of mid-tempo drumming to get things going before those sweet melodic guitars are back. I’m going to go right ahead and quote the whole first verse because it’s so good – ‘My dad says that I’d probably have more fans if I learned to sing about some happier shit, Instead of wallowing in my shortcomings, My gross insecurities, Be less narcissistic, And show some humility.’  I mean it’s utterly self-loathing but that’s part of what makes Spanish Love Songs the band they are and would they write such good songs if they were a jolly feel-good bunch of guys? I’m not so sure. The Boy Considers His Hair Cut is about sometimes being afraid to do things in case you fail or, in the case of getting a new hair cut, not wanting to end up looking like a Nazi. Nobody wants that (except Nazis – boo!).

Rounding off this release comes a song with a title that doesn’t translate so well into British English, Hot Faucet Cold Faucet. It’s a good thing I don’t judge a song by its title – and I know that a faucet is a tap – because this is another first-class Spanish Love Songs tune. It feels a little more frantic than the previous two tracks particularly with the drum and guitar parts. In fact, the start of the song almost sounds like a timer or stopwatch ticking away. Dylan sings of wanting to turn off a faucet by which he means controlling the unhappy and insecure thoughts and feelings going on in his head. This is a song about needing reassurance that you’re doing okay and just wanting to be able to cope with everything that’s going on in your life – and your head. Something that many of us will be able to relate to. ‘I wish that I could shut it off…’

Spanish Love Songs haven’t strayed too far from the sound they laid down in Giants Sings The Blues with these tracks but that’s no bad thing. Consistency in this case is consistently good and not consistently samey or boring. The worst part about Buffalo Buffalo is that it is only three songs and not a full-length album, so hopefully we won’t be waiting too long for album number two! And maybe before that they will hop over to this side of the pond and we can lose our voices screaming along to these engaging and emotional songs.

Buffalo Buffalo is out now and you can stream/download it on Bandcamp and find the band on Facebook as well.