Against Me! played at the Electric Ballroom in Camden last week. That sentence could easily be the whole review – if you like Against Me!, you know it was awesome. If that was my whole review though it would be quite lazy and definitely wouldn't do Against Me! the justice that they deserve. 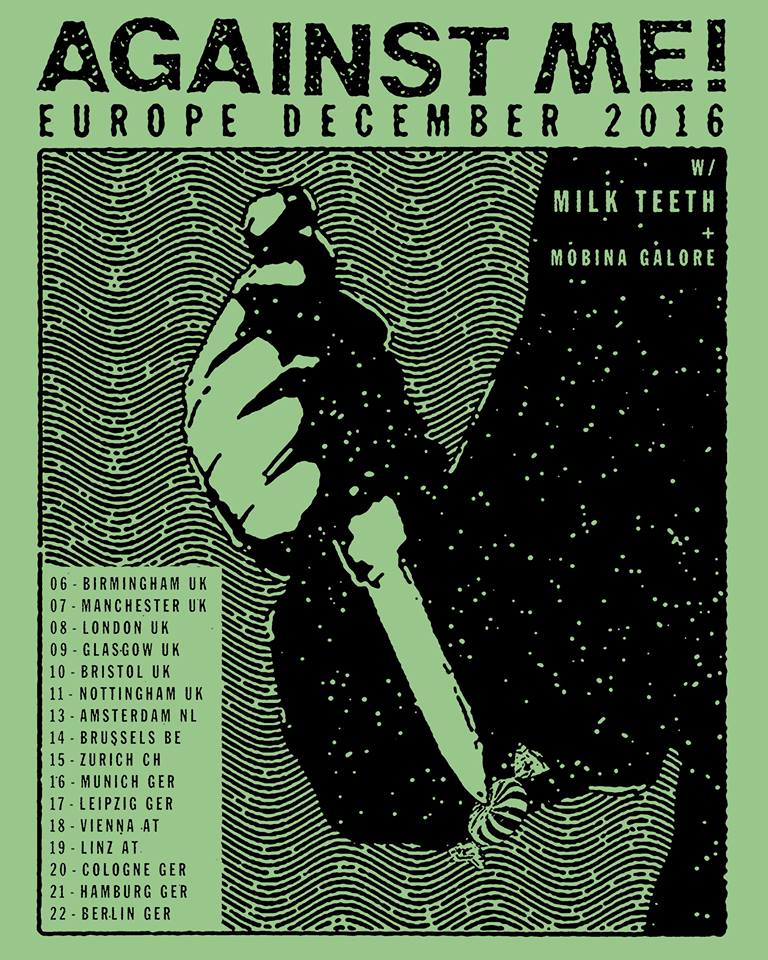 Emma and I arrived at the Electric Ballroom, which was of course sold out - Against Me! were in town afterall. First up were Canadian duo Mobina Galore. Featuring Jenna on vocals and guitar and Marcia on drums and backing vocals, their Facebook page describes them as a "vocally aggressive power chord couple." That describes them perfectly. I loved their set from start to finish. Having only two members on a stage the size of the Ballroom's I was a little worried that they might struggle for stage presence. They did not. The presence all came for a powerful musical display. I was reminded of Brody Dalle and The Distillers, which perhaps isn't too surprising considering they are the first band Mobina Galore lists as an influence. I especially enjoyed the tracks from their recently released Singles and B-sides 7", on Gunner Records. I love discovering great new bands at gigs, particularly ones I probably wouldn't have checked out normally - Mobina Galore fit perfectly into that category. Looking forward to big things from this band. 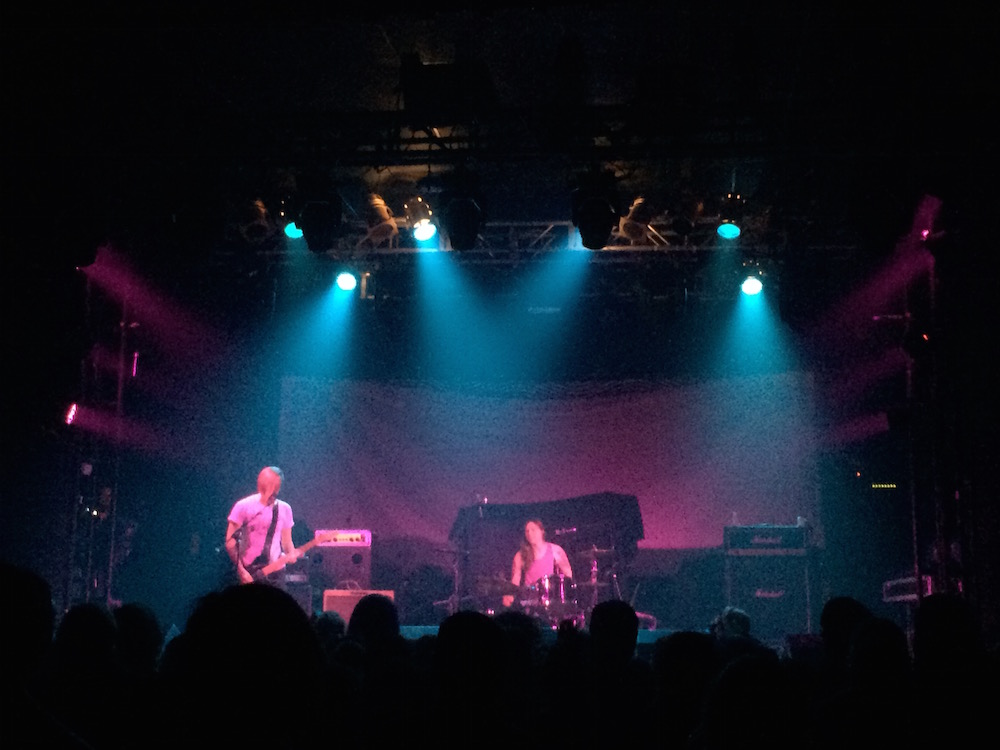 Up next were Stroud's Milk Teeth. A band I've heard a lot of hype about but have never actually listened to. Fronted by lead singer and bassist Becky Blomfield, I was immediately impressed by the band's confidence on the stage. I was expecting Milk Teeth to play more of a pop punk sound - I mostly had that impression due to "the kids" loving them. This impression was very wrong as I quickly found out that Milk Teeth play a unique brand of grunge punk rock. I particularly enjoyed the tracks that Becky as well as former Hindsights guitarist Billy Hutton shared vocal duties. It felt like there was an extra ounce of energy and passion in these songs - Billy's screams in particular really added a whole new dimension to Milk Teeth's formidable sound. This tour is a massive opportunity for Milk Teeth to showcase their music to a whole new audience and they are clearly making the most of this chance. 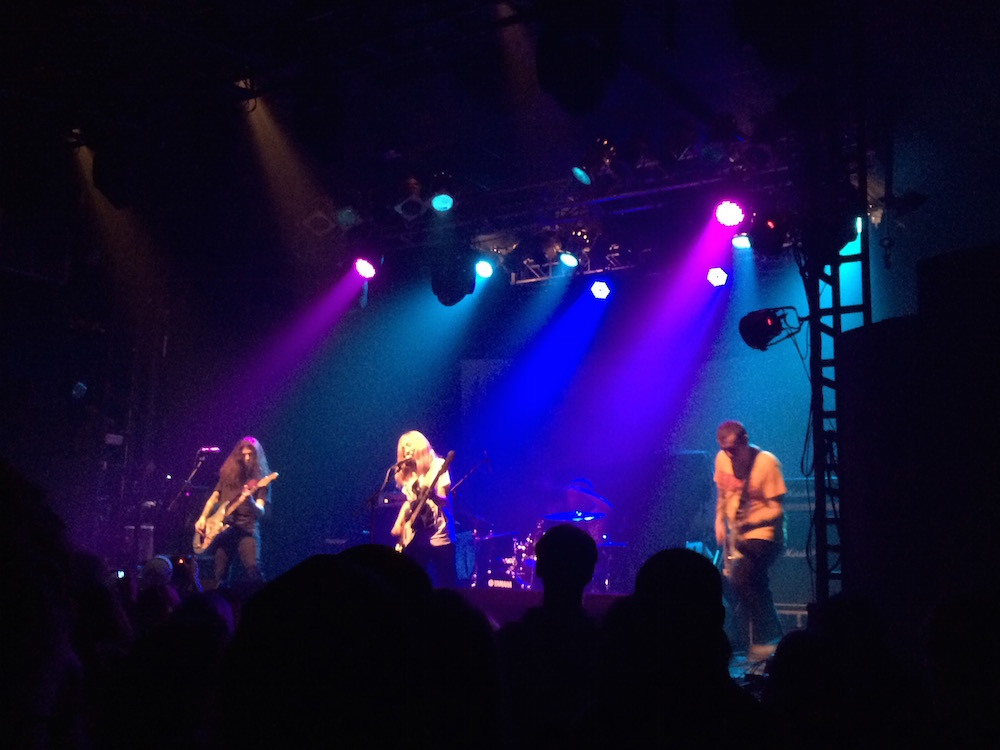 Earlier this year Against Me! released a brand new album named Shape Shift With Me, so obviously the show would be heavy on songs from that in support of the new release. I have a confession to make - I have had a very hard time really getting into Shape Shift With Me. All of Against Me!'s newer albums have been growers on me rather than instant classics but with Shape Shift With Me I found it difficult to even want to listen again to let it grow on me. Because of this I knew that I really wouldn't be able to sing along with the new material but I was really hoping that hearing the songs live would spark my interest in the new album. After beginning their set with True Trans Soul Rebel, Against Me! then wasted no time in playing some brand new material. I thought this was quite a risky move to make as the crowd may not have been suitably warmed up yet. It turned out to not be a risk in the slightest as the crowd immediately began to sing and dance to new tracks 333 and Haunting, Haunted, Haunts. To my surprise I found myself really beginning to enjoy these songs. I really got excited a couple of songs later when old favourite, Pints Of Guinness Make You Strong, was played. This is from what I think will always be my favourite era of Against Me!, so I sang loud and proud. I could already feel my voice start to get sore. From then, they played a selection of material from all of their previous albums - all of which were very well received by the Camden crowd. Then they got to another spell of new material. This is when I really felt "yeah, I should give Shape Shift With Me another chance." Crash, Delicate, Petite And Other Things I'll Never Be and Rebecca all got run outs, with Rebecca in particular really standing out. It's a fast, uptempo track which is superbly catchy. It really brought me back to more of an old school Against Me! with a much slicker production. The band really changed my opinion on that new album. From then on it really was party time! My old favourites such as TSR, Cliché Guevara and Walking Is Still Honest made the smile on my face grow bigger and bigger and my singing just got louder and louder. The band finished with an encore of a rare playing out Baby, I'm An Anarchist as well as FuckMyLife666 and the epic sing-a-long Sink Florida Sink - everyone had a wonderful night. 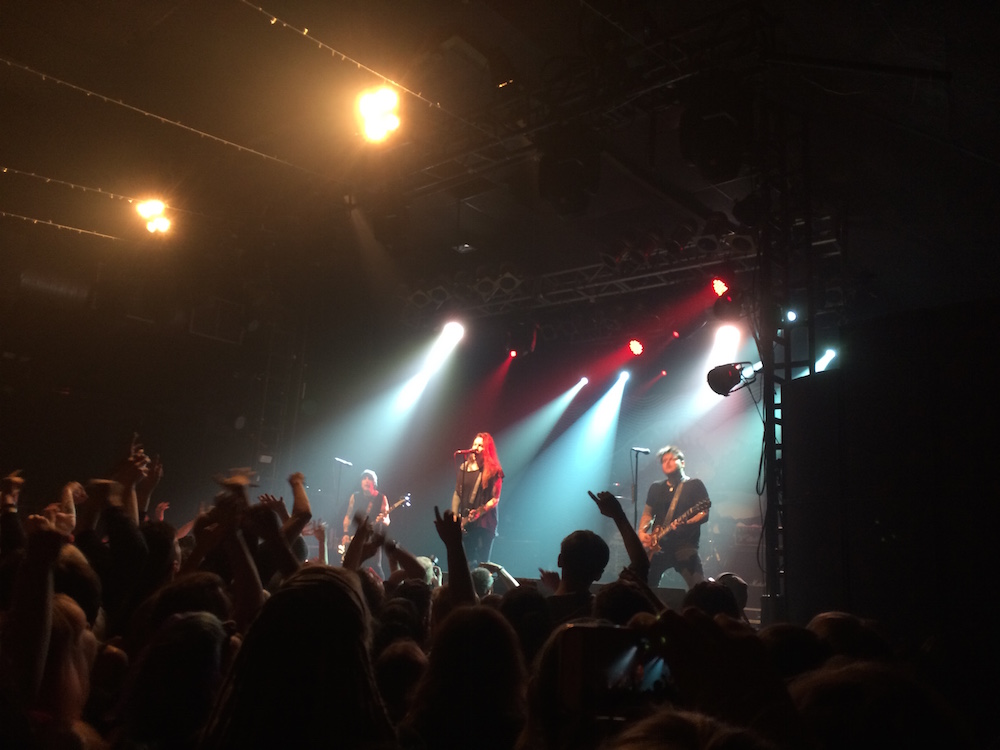 Something that I found quite amusing at the Electric Ballroom was how split the crowd was when it came to the old and new material. You could tell exactly which people were old fans of the band and which were newer from how they reacted to the material. The old schoolers would get stoked on the old songs and the new fans lost their stuff to the new material. It was never a case of us vs them though with the crowd - everyone loves Against Me! and we all came together to watch the best punk band of our generation.
Posted by ColinsPRW at 17:20:00