Album Review: Everything Sucks by Descendents

If anyone follows me one Instagram (@colinsprw) you will know that recently I got the Descendents album Everything Sucks on vinyl. Looking at the fantastic artwork for the album I realised that Everything Sucks is twenty years old this year. That makes me feel so old! To celebrate I decided I'd look back at one of the most iconic albums of the past twenty years. 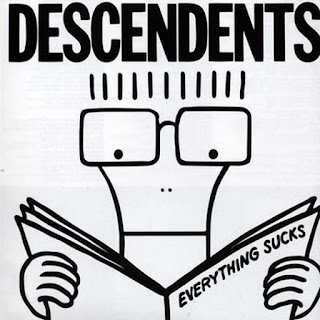 Everything Sucks was the Descendents first album since 1987's All. Everyone knows that there was such a long gap between albums because legendary lead singer Milo Aukerman took a long break from the band to become a Research Biochemist. In the mean time drummer Bill Stevenson, bassist Karl Alvarez and guitarist Stephen Egerton formed the band ALL. Though ALL were a successful band in the own right they will always be the band that aren't the Descendents so when Milo rejoined the band and Everything Sucks was released by Epitaph Records there was a lot of excitement.
Everything Sucks opens with the track Everything Sux. In true Descendents fashion there is a self-depreciating humour in the song. Milo's vocals are full of punk rock energy as he screams his way through the song. This is the perfect song to start the album, with its fast pace and insanely catchy lyrics. The Descendents were back and they were holding nothing back! I'm The One is the first of two singles released from Everything Sucks. The song is about knowing the girl you like is perfect for you but getting frustrated because the girl can't see it (we've all been there). All the punks can relate to the lyrics "Nice Guys Finish Last, No-one Knows As Good As Me, We're Just Good Friends, You Come To Me For Sympathy". Musically the song isn't as up-tempo as Everything Sux, relying more on melody to grab the listeners attention, which does work brilliantly. It wouldn't be a Descendents album without a song about Coffee. That comes along in the third song - Coffee Mug. It's thirty-five seconds of fast, fun and ferocious pop punk where Milo tears through the song explaining that all he needs in life is coffee. Up next is Rotting Out, a more melodic, mid-tempo song about not airing your problems with your family and it slowly making your relationships worse. Something I've always loved about the Descendents is that despite the countless bands they've influenced no other band sounds like them. Probably because no one will ever come as close to sounding anywhere near as good as them. Sick-O-Me begins with some trademark Stephen Egerton guitar playing - he's so fast and technical. Sick-O-Me is about starting a new relationship and hoping that the girl doesn't get fed up of you too quickly. One verse in particular really stands out during the song - "Relationships Deteriorate, I've Seen It From The Start, Easy As It Is To Fall In Love, It's Easier To Fall About I Won't Let It Fall Apart".

The sixth song, Caught, begins with one of Karl Alvarez's trademark bass lines. Alvarez is one of the most underrated bass players around, constantly creating unique and interesting lines. He's also an amazing songwriter and is the primary songwriter on Caught. Caught is about the idea of not being guilty of committing a crime if you've not been caught. When I Get Old is the second single to come from Everything Sucks. This is one of my all time Descendents songs and is the one I always play tp people who haven't heard the band. I think this is one of the most accessible tracks the Descendents have ever released; the tempo is much slower and the song really focuses on the fantastic lyrics. When I Get Old is about growing up and wondering what life will be like. There are so many great lines in the song that I could quote in this review but I think if you've not heard the song you should just go check it out yourself and immerse yourself in its brilliance. Original Descendents guitarist Frank Navetta wrote the next song, Doghouse. The tempo and aggression is upped considerably on this song as the sweetness in Milo's voice is transformed into spite. Doghouse is about being stuck in a life that you really hate but not seeing a way out of it. There are a lot of imagery lyrics in the track comparing the life to that of a dog - "I Live In A Kennel That Smells Like Rotten Cheese - this is a metaphor for living in a rubbish house. She Loves Me is another personal favourite of mine. The song is about having someone love you when you don't reciprocate the feeling. I like that the Descendents and Bill Stevenson in particular wrote a song like this as very often in Descendents and pop punk songs in general it's from the perspective of unrequited love. I really enjoy the changes in melody between the chorus and verse, switching from catchy pop to intense punk rock effortlessly. Fantastic stuff! The tenth song on Everything Sucks is Hateful Notebook. This track has a bit more of a dark feeling to it and Milo's vocals are much more restrained, almost like he's telling a story rather than singing a song. It's still as catchy as the plague though and you'll be singing along instantly.

We is the name of the eleventh song on the album. It's a slow paced love song with the message being "it doesn't matter if we have nothing as long as we've got each other”. This might seem quite gut-wrenchingly sweet for the most hardened of the punks but the Descendents never come off as cheesy when they write songs like this. Eunuch Boy is a short song (only twenty seconds) that sees the Descendents at their immature best. It's a song about a boy who had an accident with a lawnmower and chopped off his penis. The childish side of me still giggles at the lyrics "Don't Laugh At Him Cause He Can't Piss Straight, He Can't Even Masturbate". Only the Descendents can go from a sweet love song to a juvenile song about a Eunuch and pull it off. Up next is the song This Place and it’s a song about being stuck in a job that you hate. Who can't relate to that?! It's a fast-paced track with Stephen Egerton's guitar especially standing out throughout. It also has the simple but brilliantly catchy chorus of "This Place Sucks". I've never had the pleasure of seeing the Descendents live but I imagine hearing this song played live is very cathartic. The penultimate song on Everything Sucks is I Won't Let Me. On this song the Descendents revert back to their more mid-paced, melodic style. It's the Descendents so of course it's another song about girls but this time Milo is reassuring his girl that despite anything he's done in the past he won't let his girl down. The final part of the song is an extended chorus of "You Know I Won't Let Me Let You Down" with some fantastic harmonies included. The final track on the album is named Thank You. Written by Karl Alvarez it's a song thanking music for making everything better. One lyric in particular really stood out to me - "When I Feel Weak You Make Me Feel Strong". It's kind of interesting that the Descendents would write a song like this, as normally I would imagine that it'd be the fans thanking the band for making their music.

The Descendents are without a doubt one of the most influential bands ever in punk rock. Without them so many bands would never have existed, bands like The Offspring, Green Day and Blink-182 who have become household names all over the world just would not be around if not for the Descendents. They are truly innovators. Like I said early in the review, it's interesting that despite being such an inspiration there is nobody that really sounds like them. That's how good the band is as individuals and as a collective; nobody can come close to being as good as the Descendents. They are wrong about one thing though, not Everything Sucks, the album Everything Sucks definitely does not suck.
Posted by ColinsPRW at 17:35:00