A boiling hot evening in Whitechapel would be the setting for Durham acoustic punks ONSIND first London gig of 2014. One Seven Six Records were putting on a night of punk rock featuring ONSIND, Erica Freas from Washington punks RVIVR, Losing Sleep and The Fairweather Band at Urban Bar. It promised to be a fantastic night. 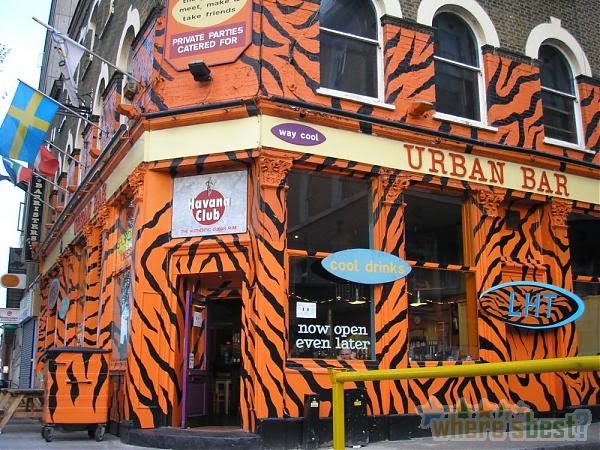 This gig almost had a strange sense of déjà-vu for me. Last year I attended a RVIVR show at The Black Heart in Camden, on the bill that night the members of ONSIND’s other band Martha and The Fairweather Bands lead singer Rory was performing as his solo act Some Sort Of Threat. Not really that important but it is kind of interesting. (At least I think so)
Exeter’s Fairweather Band were the first band up this evening and having never heard any of their songs before I wasn’t completely sure what to expect. I soon discovered that this four piece play some straight forward rock music with a nice punk snarl. I could really give a fair verdict on their set as it was sadly marred with sound issues but they seem like a band with some great potential.

The second band of the evening was Losing Sleep from Kingston. Losing Sleep are a band whose name I had read a lot on different punk websites and zines but had never given them a listen. I really enjoyed what I heard of this young four piece band. They played some of the best pop punk I had heard for a long time. The songs were very well structured and I especially enjoyed the interesting bass lines. The singing sounded heartfelt and carried good emotion and was backed by some fantastic harmonies. During the set the band spoke about an organisation named DIY Space For London. This organisation’s aim is to make a DIY, all ages and all inclusive space for gigs in London. It’s a great organisation and you can get involved here. 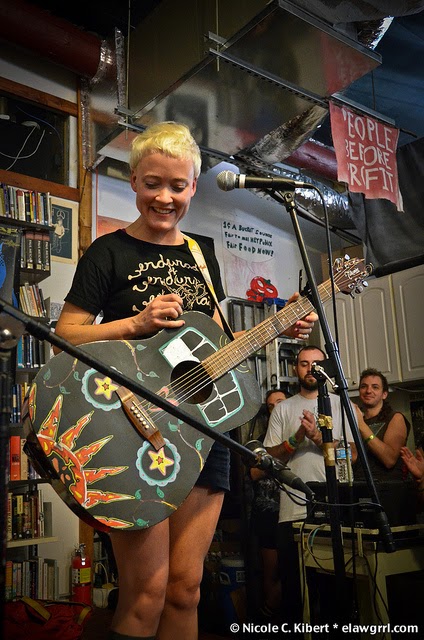 Urban Bar now felt like a sauna and sweat was now pouring out of everyone but it didn’t matter as it was now time for Erica Freas. Normally Erica plays guitar and sings with her punk band RVIVR but tonight she was playing solo with just her acoustic guitar. The room was now full of people eagerly awaiting her performance. She remarked during her set that she thought it was crazy that that so many people would come out to see her play acoustic guitar, I thought that it was crazy that she would come so far to play to such a small room full of people. I have never known a room to be so silent; we were all listening so intently to every word she sung and every chord that she strummed. The set was mixed with songs from her solo efforts Tether and Belly as well as some RVIVR songs.

It was now time for ONSIND from Durham. I was really excited to see these two fellow’s again. I’d previously seen them at their last London show at Power Lunches in Hackney where they had blown me away. In truth it’s just two blokes playing acoustic guitar and singing but the atmosphere they create is something else. Where the room was silently listening to Erica Freas it was loud and proud for ONSIND. From the opening song to the last the whole room was singing loudly with Nathan and Daniel. ONSIND’s songs contain lyrics about mental health, sexism, homophobia and politics amongst other things and with everyone singing along with them it felt almost like being at a rally rather than a gig. 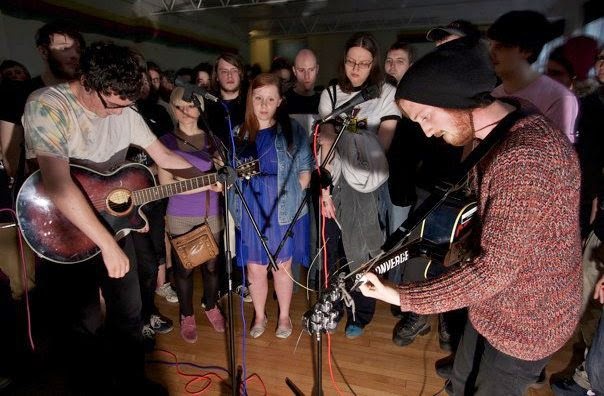 There was a nice surprise during the song Dissatisfactions when Erica joined the boys on stage to provide her vocals to the song like she did on the record. The biggest surprise was saved for the final song. After ONSIND had played the excellent Heterosexuality Is A Construct Erica took to the stage again and they performed a cover version of the song Starships originally done by Nicky Minaj. This was a really special moment for me as I had discovered both ONSIND and RVIVR through the video of this cover they put on YouTube. I never ever expected to see it live but I now had!

Despite being the sweatiest gig I have ever been too, some feat considering the two headline acts were acoustic it had been an amazing gig and after hugging a couple of equally sweaty strangers I headed home with a massive smile on my face.

Now listening to Walking Is Still Honest by Against Me!