If you’re a regular reader of CPRW then you probably know that we love a split release! Often it’s a chance to discover a new artist, alongside one you already know and love. In this case, I am aware of both bands involved in this split but I’d say I’m more familiar with Teenage Halloween than The Homeless Gospel Choir. This gave me the perfect opportunity to check out more of The Homeless Gospel Choir – and the new tracks from Teenage Halloween, of course! The split was released on 1st January on Don Giovanni Records and here’s what I thought of it… 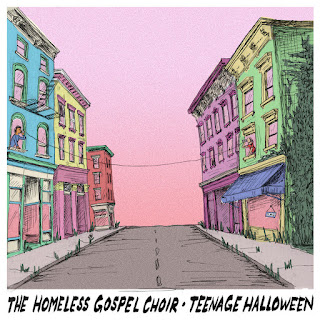 Each band has two songs on the split which, as far as I’m aware, are new tracks for both bands. First up is The Homeless Gospel Choir. THGC are a raucous protest-punk band from Pittsburgh, PA, who have evolved from the solo project of Derek Zanetti to a five-piece band. Track number one, Harrisburg Shoes, wastes no time in getting started with a huge-sounding combination of warm guitar tones to welcome the listener to the split. My immediate impression of the track is that it sounds a lot less ‘folk punk’ than I was expecting but, as much as I do love my folk punk, that’s certainly not a bad thing. The guitars are wonderfully melodic and give the song a positive feeling – something I think we can all appreciate at the start of a new year – although THGS’s lyrics are notoriously not so optimistic. The second track from the band is called Pittsburgh Shoes (I’m not sure why there’s shoe theme) and it opens with the slightly bleak but relatable line of ‘It feels like it’s just you, sitting in your room, and everyday just feels the same, your friends quit calling you.’. The first verse starts slowly with the instruments taking a backseat to Derek’s pessimistic lyricism but things start to amp up as we head further into the song with plenty of distorted and fuzzy guitars soon injecting some energy into the song. The track has got that slightly raw quality to it that I’m familiar with from when I’ve previously listened to THGC. Towards the end there are also kazoos. Yes, you read that correctly. Kazoos! More kazoos in 2022, please!

Teenage Halloween take on the second half of the split. The band, who are a six-piece power-pop/indie punk band from Asbury Park, NJ, released their debut full-length in 2020 and it was on repeat an awful lot for me at the start of 2021 (it took me a few months to actually get around to listening to it – sorry!). The album featured ten passionately poppy and energetic tracks about mental health and queer struggles and the new tracks on this split continue in a similar vein but bring with them a breath of fresh air. Floating is up first and initially opens with the jangling of keys before immediately plunging us into an upbeat and catchy pop punk track. It’s a short and fairly fast-paced song that features a great exchanging of vocals between Luke and Tricia come the chorus. The layered vocals and harmonies is definitely one of my favourite things about Teenage Halloween’s music so it’s great to hear it again here. The last song on the split is called Burn. Tricia takes over on lead vocal duties here for what is probably the stand-out track of the whole EP – which is saying something because everything on this split is great. Much like the previous track, Burn is upbeat and energetic but it also feels kind of erratic, I think mostly due to the jazzy keyboard playing. Either way, I love it. The track also happens to be the perfect fist-in-the-air cathartic protest song. You only have to read the lyrics for the chorus – ‘I don’t want your empty promise, I don’t want your easy fix, I want to burn the city down, And rise from the ashes.’ – to get an idea of what makes this song so great. Alternatively, you could listen to it yourself!

Stream and download The Homeless Gospel Choir / Teenage Halloween on Bandcamp here. You can also pre-order the limited edition yellow vinyl there, which looks very nice (artwork by Maura Weaver, of THGC).

The Homeless Gospel Choir are touring the UK in the summer which I’m very much looking forward to. Hopefully I will be able to see Teenage Halloween live as well, somewhere down the line!