New Yorkers The Jukebox Romantics released their long awaited new EP Fires Forming at the end of 2021. This was the band’s first new material since their split with The Sewer Rats which was released in 2018. I didn’t really start listening to them until they did a UK tour with our friends Triple Sundae in 2019, followed by a European tour in which they played Hamburg’s Booze Cruise Festival. I was lucky enough to catch them at that festival and absolutely loved their set. I also really enjoyed their Alkaline Trio cover set that they played the same evening. It was honest, heart on your sleeve punk rock that was written to be played in sweaty basements. That’s exactly my kind of thing so I was very keen to check out this EP. Christmas very much got in the way so now, at the beginning of January, I’m finally getting some time to check out Fires Forming. 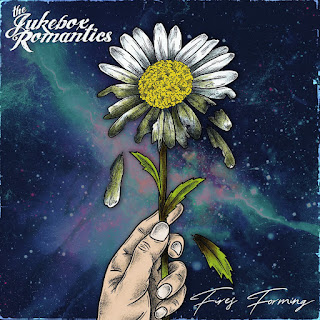 The five track EP begins with Time To Fly. The track wastes no time in getting started, getting the EP off to a blistering start. Time To Fly is a real call to arms of a song. I don’t know if The Jukebox Romantics really stray much into the realm of politics that often but this track is one that really encourages the listener to stand up and rebel against the people who are supposed to be in charge and helping but are instead using opportunities to capitalise for themselves. This is such an uplifting way to start the EP. Up next is Hey Nora. This was the band’s lead single for the EP and they even made a fun music video featuring some wonderful dance moves. One of my first observations about the track was the pounding drum beat that provides such a thick spine for the song. It’s a simple beat but, boy oh boy, does it drive the song on. The song feels deeply personal and I believe that it’s about seeking answers on how to make the world a better place from a departed loved one. The chorus is a wonderfully catchy one that will have a room of people shouting the lyrics right back at the band.

The third track on Fires Forming is titled Dine Fleisch. On Punknews I came across a quote from the band’s Mike Terry stating that the song is about how we as humans have a choice about what we consume and how animals don’t have that choice. The song is written from the viewpoint of animals at a farming factory who are trying to plot their escape. Given the song’s meaning, it’s perhaps no great surprise that this is one of the heavier songs on the EP. I particularly enjoyed the intensity in the vocals, they really made me pay that extra bit of attention. The penultimate song on the EP is named You Spin Me (Right Said Fred). This song sounds like a bit of a nineties throwback compared to anything else on the EP. It shows that The Jukebox Romantics aren’t afraid to wear their influences on their sleeves. The chorus in particular reminds me of a lot of the melodic skate punk from the 90s and early 2000s era of skate punk. The track has a bit of a chaotic ending with a melody switch and some big harmonies. The final track on the EP is Castaway. On my first listen through of the EP this was the song that stood out the most, with its slow start where the band sing about wanting to get away from their home and finding somewhere better. Soon enough the song kicks in properly and we are treated to a mid tempo basement sing-along. As I listen to the song and read the lyrics, it dawned on me that the idea of leaving a town might be a metaphor and instead the song is about dealing with mental health issues, in particular trying to get through them before it’s too late. This track really has a feeling of a final song, especially with the atmospheric “whoa-ohs” that are included and the long fade out that gives you time to really think about the final lyrics of “get me out of this world before I run out of time.”

Fires Forming is a superb addition to the Jukebox Romantics discography. This really is a solid EP from such a solid band. I only have one gripe with is, I wish they had done an entire album because as soon as it finishes I still want more. Hopefully that’s in the pipeline and they’ll be back in the UK or Europe sooner rather than later. I’m keen for another shout-along.
Stream and download Fires Forming on Bandcamp here.
Like The Jukebox Romantics on Facebook here.
This review was written by Colin Clark.
Posted by ColinsPRW at 13:10:00