Album Review: Nailed It! by Knuckleball

When a band describes themselves as "Upbeat 90s flavored pop punk that makes you want to mosh and laugh at the same time. If nothing else, it reminds of the days before Green Day became Broadway stars" you have to know I'm going to be interested in checking it out. The band in question are Waco, Texas' Knuckleball. At the beginning of September, the four piece released their debut EP Nailed It! 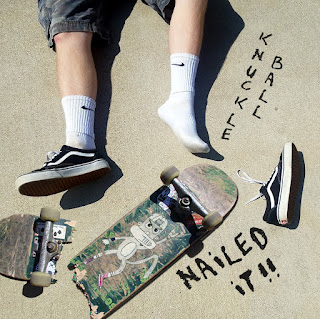 The six track EP Nailed It! begins with the song Emily. The opening of the track shows that Knuckleball definitely weren't lying about their style as the track is filled with youthful energy immediately. It really does take you back. When lead singer Andrew French comes in he has this great melodic style vocal rather than the fast paced, urgent style I expected. This gives the whole song a mature sound. The track is about being in a relationship where things are getting progressively worse and deciding to end it. High Anxiety could easily be from a late 90s Green Day album. One, because it has that sound that is so associated with that era of Green Day and, two, because it's really good. Wasting no time in getting started, the vocals kick in straight away giving the song a startling beginning. Doing this immediately gives you a bit of a rush and you're excited to see where the song goes next. The song is about struggling with your mental health and not really understanding it. The third track is named Rent-A-Hero. This song tells a story of a security man who does a wonderful job. The track is a fitting tribute. I really like the storytelling style of the song, it paints a great picture. Rent-A-Hero is a mid-tempo melodic song that doesn't really hit any highs or lows but just goes along in a pleasant manner.

Insomniac is another track that really reminds of classic Green Day. It's about living your life as an insomniac and what that's like. The line "I'll watch The Office Until 3am, maybe I'll be tired by then" is a line I really related with. Except watching Cheers instead of The Office. The song has quite an upbeat feel to it despite it being quite a sad topic. The penultimate track, White Trash Beach Party, has more of a throwback sound. More so than the 90s pop punk sound, this is more along the lines of the Ramones’ unmistakable sound. There's even a "hey ho! let's go!" thrown in for good measure. I love this Ramonescore style so the song really stood out on Nailed It! for me. It describes what a White Trash Beach Party is like with plenty of humour. The sixth and final song on Nailed It! is titled Frankly, My Dear. This song is the most hooky of all the tracks on the EP, with the chorus quickly taking up residency in your head. It's one of those songs where you can see the band, the crowd and yourself pogo-ing up and down for the chorus.

If I had to describe Nailed It! in one word it would definitely be throwback. Knuckleball certainly weren't telling tails when they spoke about their influences. They don't just rip off the genre though, they take it and give it their own spin. If you're a fan of 90s pop punk (and who isn't?) then this might very well be up your street.

Like Knuckleball here: https://www.facebook.com/knuckleballofficial/
This review was written by Colin Clark.
Posted by ColinsPRW at 12:12:00