Album Review: May Your Ashes Have Stories To Tell by Everymen

If there was one band that I didn't know but really made me a fan when Emma and I visited Gainesville for The Fest last year it was Everymen. The Floridian five piece's eccentric brand of folk punk rock was full of energy and was definitely THE biggest surprise of the whole festival. I was beyond stoked when I got an email from the brilliant Say-10 Records, whom the band had recently signed to, to review their brand new album, May Your Ashes Have Stories To Tell. If the band are half as lively on record as they are live I was sure to love this album. 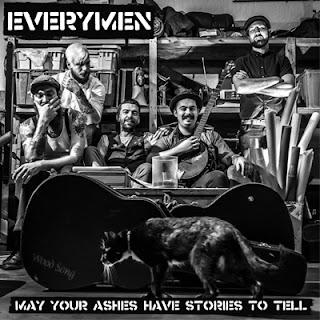 First up is the track Shake Your Bones. Immediately the guitar teleports you to the swamp (metaphorically, guitars don't have teleportation powers) and we get a feel of what Everymen are all about. It's fast paced folk dance, designed to get you dancing joyfully and singing along with all your pals. The double bass does a fantastic job of holding the song together while a mass of other instruments do their thing and go off in all directions. A very strong start to the album. In the past year or so the members of Everymen have sadly lost some close friends, this is addressed in the second song, Dead Friends. This song is a stirring tribute to lost loved ones with the lyrics "Memories That Linger With Time, And The Ghost Of Your Heart Will Never Die" basically saying that even though you are gone you will never be forgotten. This is an incredibly emotional song lyrically and a really fitting tribute for anyone who has lost somebody that they care about. Annihilation has more than a whiff of early Against Me! about it, which made me fall in love with it immediately. The song starts out slowly before building into a full on raucous punk party. The rawness to the recording adds an element of real to it. Annihilation is about destroying yourself because you're struggling to deal with things that are happening in your life. I loved this song so much. I can see it easily appearing in my end of year lists.

The fourth song, How To Live, is another highlight. This is a proper barroom sing-a-long, foot-stomper of a song. The sort of song where you put your arm around whoever is next to you, stick your other arm, with drink in hand in the air and just shout along with all the joy in the world. How To Live is an upbeat song about letting down the walls that prevent you doing things and learning how to get the most out of your life. Don't Rain On My Parade starts out with a slow, gypsy punk style before transforming into a fast paced, dance-like-a-maniac track. It's the longest song on the album and really allows each member to show off their immense musical skills. The song switches styles again towards the end of it, slowing things down for some polka to complete the song. In my mind I'm imagining the crowd have a good ol' square dance. The sixth song is a re-recording of the opening song Waking Up Hurts off of the Everymen album Beautiful Curse. I'm interested to know why they decided to re-record this track for Ashes. I'm not complaining though, it fits in perfectly. I love the lyrics at the end of the song - "When I'm Feeling All Alone, I Can Hear You On My Stereo." Tattoo worthy lyrics. Time is another that starts out slowly before launching into a fast paced punk sing-song. Starting slow and building the track up is something that Everymen do very very well. Time is about setting you free. I know this because these are the words to the chorus. It's about learning from mistakes over time and growing as a person.

M.B. is a song dedicated to folk punk legend and good friend of Everymen, Erik Peterson of Mischief Brew, who so sadly died last year. M.B. is an up-tempo number with plenty of very poignant lyrics. "You Created A World Surrounded By Friends, May Your Songs Get Stuck Out Of Our Heads" and "When We Sing Out Loud To Your Songs, With More Feeling Than Ever Before, With Our Hearts In Our Throats, We Have To Let Go" really stand out. Just a fantastic song and a very fitting tribute to a great man. The penultimate song on May You Ashes Have Stories To Tell is named Taking Work Home. The beginning of the song feels extremely old school Against Me! again - like I said earlier, never a bad thing! After the obligatory slow start, we are treated to more fast paced folk punk fun. I cannot state enough just how good Everymen are as musicians. It's hard to remain still whilst listening to them play. This is most evident at the end of the song where the melody is switched up and drives up towards the end of the track in a great fashion. On the final track, Don't Stay, the band switches things slightly to a Baltic/gypsy sound reminiscent of Gogol Bordello. On my first listen of the song I was waiting for the expectant slow start/fast ending song structure that I had become accustomed to on this album. This doesn't happened, instead we are treated to a fiddle lead song that features a female vocal playing off lead singer Sergio Witis. The whole track has a bit of a haunting feeling to it, the fiddle playing helps create a fantastic atmosphere. A brilliant ending to the album.

I don't often review folk punk albums for Colin's Punk Rock World, as that tends to be Emma's specialist area. I'm so pleased that I decided to do May Your Ashes Have Stories To Tell. It's a great album that has inspired me to dig deeper into the fantastic world of folk punk and uncover some more excellent bands like Everymen.

Download May Your Ashes Have Stories To Tell here: http://www.say-10.com/store/everymenashes/