Yorkshire trio Zapiain describe this album on their label’s website with a comparison that neatly encapsulates the three cornerstones of their sound; “[…] fans of such 90s heroes as Jawbreaker, Leatherface or Samiam will once again find themselves in the sweetest of familiar territories.”[1] Without wanting to be unfairly reductive, it’s safe to say that is about as on the nose as I could describe them, but that’s intended as a compliment. 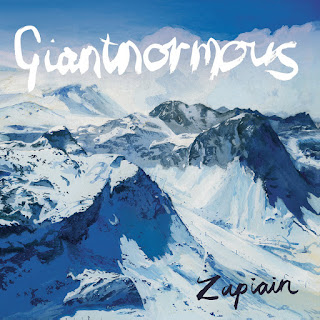 Chris Hall’s rough, low-register bark is mixed quite prominently in the mix, which was a smart move as his gnarled voice actually carries the songs with a bracing grit and fervour halfway between Frankie Stubbs and Blake Schwarzenbach, while the rhythm section of Chris Haigh and James Booth capably tear along, contributing vocal harmonies as and when appropriate. The guitars’ clanking grit is even a little reminiscent of Jawbreaker’s 24 Hour Revenge Therapy, mixing in some saw edged high notes among the growling barre chords to keep things interesting.

Opener ‘My New Home’ sets the bar high, with a slicing hook and satisfyingly meaty palm muted chugging, with Chris Haigh’s weathered roars of “Rock bottom / Every day” cutting through the din. Things don’t really let up from there, with the furious ‘Survivor’ and ‘Antimatter’ giving way to the slower ‘Shotgun’, which features tangibly bitter lyrics. Elsewhere, ‘Zapplecross’ is a bit of a ripper, as is ‘Sulk And Beg’, with its pointed lyric of “You can be the one to prove me right / By proving me wrong”. In spite of its stupid title, ‘Mislaid Eyes’ is another winner with barrelling crunchy riffs and power pop hooks abound, and ‘Sunrise’ ends the album on a sweet, soaring guitar solo to bring things home in riotous fashion.

Not everything works; ‘Without Warning’ loses itself a little and ‘Twin Geeks’ pales a bit in comparison into the strength of the tracks around it. But on the whole this is a solid, enjoyable effort, put together with heart and conviction. What’s not to like?

This review was written by Omar Ramlugon.
Posted by ColinsPRW at 10:21:00