Album Review: Everyone Is Happy Now by Permanent Record (by Emma Prew)

Dave House has been a part of the UK punk scene since the late 90s, both as a solo artist and in various punk bands, including, most recently (and currently) Pacer. Everyone Is Happy Now is Dave’s first release under his new guise of Permanent Record. The album was written, recorded and produced by himself in his own home between 2013 and 2016. Although the work of the same man, the music has taken a leap forward from his previous solo releases hence why he felt the need to change his ‘name’. 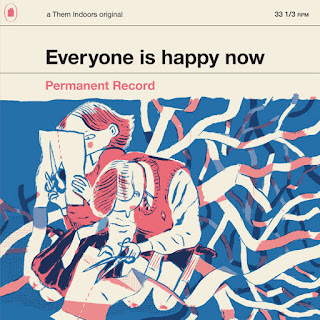 Everyone Is Happy Now starts off with a song called Ten to Two. The drums and bass kick in first for about 20 seconds, before Dave’s vocals and some melodic piano begin. It’s a fairly slow paced track with a lot of layers musically that build throughout the song. It’s clear to see, even just from the first track, how different this is to Dave’s previous solo releases. There is a definite sense of progression.

Ten to Two finishes and track number two, Brave New World, starts immediately with some melodic guitar. Whatever effects Dave has used for the aforementioned guitar even gives it a sort of dream-like sci-fi feel – you know, like the title of the song (maybe that’s just me getting carried away…). Although by no means a fast punk song this song seems to have more pace to it, complete with a more uplifting and positive feel.

I Can’t Believe You’re A Fireman is one of the tracks that has been streaming ahead of the album’s release, possibly because it features the title of the album within its lyrics. ‘Everyone is happy now, Facts like these don’t change. There’s nothing missing from our lives, Nothing I’d exchange.’ (On a little side note: I love it when a song on an album has the album title in its lyrics without just being a ‘title track’.) Like Brave New World, the song also has a positive energy with an almost pop punk or indie pop sound.

The next song, Instrumental Number 1, is as the title suggests a purely instrumental track. It develops the melodic instrumentation that has already been shining through on previous tracks and provides a moment of pause between songs. Although, unusually for an instrumental interlude, we are not yet halfway through the album. The track further confirms something I’d been considering with the first three songs – Permanent Record sounds quite like Death Cab for Cutie… to me, at least. That might sound like an odd comparison for Colin’s Punk Rock World, but I don’t think it’s a bad thing!

The fifth song on the album, White Rabbits, is in my opinion one of the best on the album. It’s one I remember hearing live when Dave supported the Barnett Brothers at the Cricketers, in Kingston, earlier this year – because it’s so darn catchy. Lyrically it’s a song that most of us can relate to, about being anti-social whilst engaging with social media. ‘I wake up to check the news, And by news I mean feeds. More anti-social timelines that should mean nothing to me. I picked up a bad habit, For chasing white rabbits.‘ I could go on quoting more of the brilliant lyrics but I’d just be writing out the whole of the song.

The Vision, although not purely an instrumental track, has a full minute and a half of mesmerising instrumentation before the vocals begin. Unsurprisingly this is the longest track on the album at just over 5 minutes long, but that doesn’t mean that it drags. As with many of the songs so far, The Vision has a really sense of progression throughout. The song is about getting older and dealing with how you drift apart from certain people or scenes. But, again like much of the album so far, Dave doesn’t reflect negatively to these feelings. ‘I used to understand how it felt to be part of something, Now I can’t remember when I was part of anything. I used to know my friends, But now could I say that’s true? We’ve moved in different circles, Unraveling a loop. Age happens to the best of us…’

The next track on Everyone Is Happy Now is called Bucket Chair and is a very much nostalgic song for Dave. The lyrics focus on him reminiscing about someone; ‘You had that tiny room and when I pass each time I think of you, You had that bucket chair, oh I still expect to see you there.’ and reflecting on when he heard the news that that same someone had died; ‘I got that call on a Thursday night, The words he said still amplify. When I was 900 miles away, While we were on stage.’ The song isn’t sad however, it’s more about remembering the good times; ’When I hear that song again, That you taught me on guitar. I put your coat around my shoulders, To pull you closer from afar.’ It’s a powerful song lyrically and seems a heartening way of dealing with grief, something that I’m sure many people would be able to identify with. I think, assuming my ears aren’t deceiving me, that there might be some female vocal harmonies on this track too.

As the album starts to draw to a close, Is That Me? slows things down a bit. The piano that appeared at the beginning of the album also returns to add another element alongside guitars, bass and drums. Like in The Vision, Is That Me? also features a lengthy musically introduction. It’s a song about reflecting on your own life and how you’re just one tiny part of the human race. ‘Are we the only species that truly know we’re gonna die? No option but to reflect on how we spend our time.’ It sounds fairly melancholic compared to earlier songs on Everyone Is Happy Now but I think the ultimate message is to make the most of your life and do what you want to do.

The penultimate track on Everyone Is Happy Now is called Airport 5am and is another purely instrumental track (aside from some choir-like ooh ooh oohs towards the end). As you might imagine from the title, it’s a quite slow paced track. Starting with some slightly sad sounding and very slow-paced piano, before the tempo picks up a bit and guitars and drums join the mix. You can almost picture yourself walking through an airport at 5am, passing sleepy people on their way to and from various worldwide destinations.

Abilene is the last track on the album and doesn’t waste any time in getting going. It’s an upbeat track with jangly guitars and pounding drums. There is a thing called an ‘Abilene paradox’ where a group of people collectively decide on doing something that is the opposite preference of many of the people in the group. I don’t know for sure that that’s what this song is about but it seems to fit and is more likely than it simply being about the Texas town. ‘Tell me there’s a future for the ones that don’t fit in, We won’t get left out on the lake with water coming in. I thought it’s what you wanted, But I must have just misread, The social cues from everyone that I have ever met.’

Everyone Is Happy Now has been some years in the making but I think it was well worth the wait. Bravo, Dave House!

Read my Art of Punk post about the album artwork here.

Check out the album on Bandcamp – you can stream several of the songs already – where you can pre-order the digital or vinyl release.