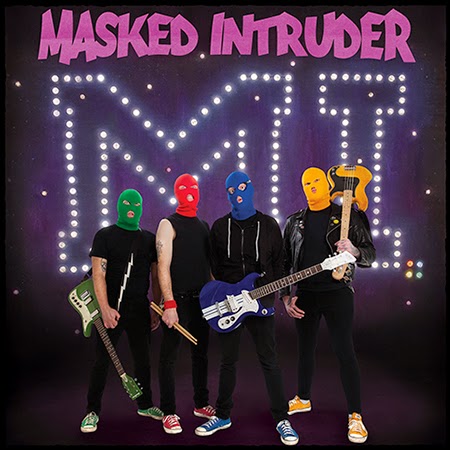 Gimmick bands are not something that is usually successful in the world of punk rock. For sure there are plenty of bands that don’t take themselves at all seriously but when all is said and done it is people being themselves playing music they love. Then there is Madison Wisconsin’s Masked Intruder. This pop punk four piece claim to be four convicts who met in prison and ALWAYS wear ski masks to protect their identity. Their songs are all about their criminal past and of course, like all the great pop punk bands – girls. What’s great about Masked Intruder is that the songs are so good they don’t need the gimmick to get the fans onside, it just adds to the fun. They are one of the most popular new bands going having put out releases on Red Scare Industries and then Fat Wreck Chords. Masked Intruder are currently on a short UK tour supporting their 2014 release M.I. Here is my review.

Starting off with the sound of a police siren before launching into the opening track I Fought The Law. When I first saw this title on the CD case I wondered and slightly hoped it was a cover of The Clash’s version of I Fought The Law. This song starts off with some buzzsaw guitar chords that you would expect from any pop punk band before lead singer Blue’s sugary sweet vocals kick in. I should explain that the band go by the nicknames Blue (vocals and guitar), Green (guitar), Yellow (bass) and Red (drums). This song combines both of Masked Intruder’s main song inspirations, the police and girls. It’s about the cops stopping them getting close to a girl and fighting against them. The song is littered with fun lyrics such as “I try to get close to you, instead I see flashes of red and blue.” This song is followed up by The Most Beautiful Girl. Obviously Blue is singing about the most beautiful girl he has ever seen. It’s a fun, simple and catchy song with some brilliantly harmonies. 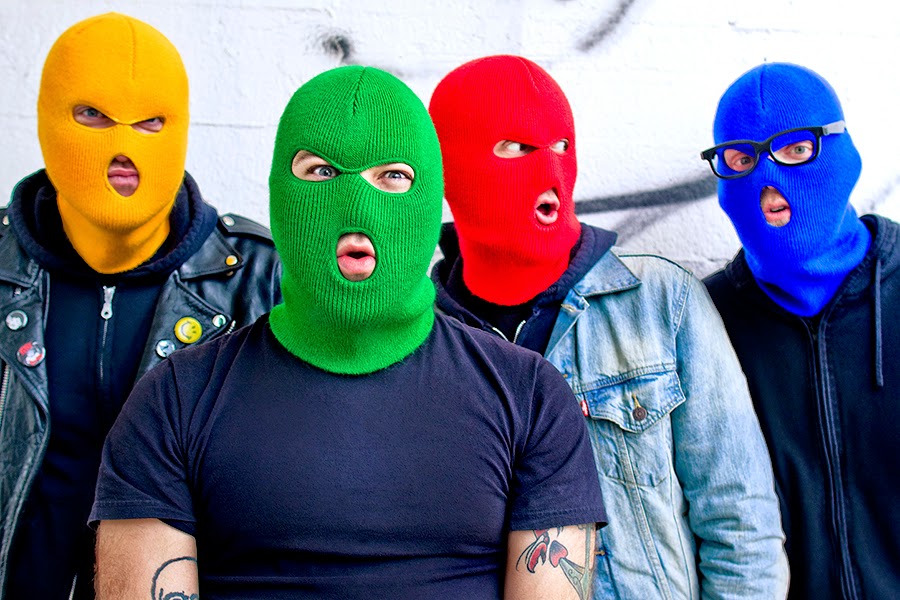 The third track Crime Spree begins with a nice drum roll before going into a Thelma and Louise type story about two people in love committing crimes together. Saturday Night Alone is about being free and not spending time by yourself. With Beach Boys style harmonies and an a cappella section towards the end of the song it’s another song you will be singing along to very quickly. Track five – When I Get Out is a doo-wop heavy song where Yellow and Green back Blue superbly with some three part harmonies. Blues sugary sweet vocals take the lead in Stars as it begins with just that accompanied by some gentle clapping and what I think is a xylophone but could be mistaken before the full band kick in. Another song about love, Blue sings about wanting to be with someone forever even if they don’t want to be with him.

The biggest surprise on the album comes in the seventh song, Almost Like We’re Already In Love. This stripped back a cappella song again displays the bands impressive vocal section. Throughout the song you expect it to pick up but even the most ardent of punk fans won’t be disappointed that it never does. The album does pick up on the next song Hey Girl. Starting out with a drum beat and some Matt Freeman-esque bass lines before a Ramones inspired chorus of “hey girl, whatcha doin,’ whatcha doin’ baby?” which you will be singing instantly. At just one minute and fourteen seconds long it’s the shortest on the album but definitely hits the spot. With Don’t Run Away the music gets heavier as Blue sings about constantly getting rejected by girls as soon as they meet him “but as soon as I say hello, it seems it’s already time to go.”

The tenth song You’re The One To Blame tells the story of a man in love who has done some bad things because of it with the reasoning of “I did it for love.” Weirdo is M.I’s Heart Shaped Guitar where Blue gets a bit creepy and can’t take no for an answer despite being called “a freak, a geek, a weirdo, a positively creepy guy.” This song has a great Weezer and Nerf Herder vibe. I Don’t Want To Say Goodbye To You Tonight has a 60’s rock n roll feel to it and oozes with harmonies. There is a huge Ramones influence as well in Reds drumming. Masked Intruder strip back the music again for the beginning of the last song Locked Up and Lonely. The song is about being in jail and wanting the girl you love to come and rescue you (sort of like a reversed modern day Rapunszel). This is a fitting end to the album, after doing all these crimes for love you finish up in “the big house.”

M.I is a great second album from Masked Intruder. The production is of course first class and is done by Matt Allison who has also worked on albums from Alkaline Trio, The Lawrence Arms and The Menzingers to name but a few. M.I proves once and for all that Masked Intruder aren’t just a band with an amusing gimmick but they are one of the brightest bands to emerge from a burgeoning pop punk scene in America.

Now listening to Stick 'Em Up by Masked Intruder
Posted by ColinsPRW at 16:49:00