Whenever Philadelphian punk rock heroes The Menzingers are in London I just have to be there. I’ve seen them go from playing relatively small capacity venues such as the Old Blue Last and The Underworld to the larger (for punk show, at least) places like the Scala and Koko – not to mention seeing them play the main stage at Fest. I’ve loved every single Menzingers show, some more than others of course, but I didn’t think the day they’d be headlining Academy venues would come around so soon. The Menzingers went from being a reasonably popular punk band to a super popular punk, or perhaps just alternative rock, band thanks to their latest album, After The Party. On 3rd February 2018 – which also happened to be the first birthday of that last album – The Menzingers headlined Shepherd’s Bush Empire. Bringing along Canadian punks Pup and fellow Philly band Cayetana, this was a gig not to be missed. 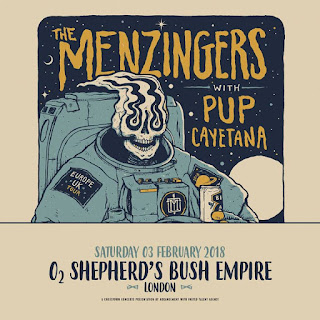 Opening up dates on The Menzingers’ UK and Europe tour were Cayetana, a three piece indie pop punk band from Philadelphia. I believe this tour was their first time in Europe and their excitement at playing overseas alongside Pup and The Menzingers to sizeable crowds really showed. They appeared comfortable but happily humble on the Shepherd’s Bush stage and lead vocalist and guitarist Augusta expressed how thrilled they were to be there – particularly commenting on how beautiful the venue is. She has a point, the old elaborate theatre ceilings and balconies are something that pub venues don’t have. We saw Cayetana at Fest in 2016 but I have to admit that I was overheating at the time, in the Floridian sunshine, and don’t recall much of their set. Because of this I was looking forward to seeing the band again – properly. They did not disappoint. I wasn’t familiar with the songs but they felt easily accessible. I was particularly impressed with Augusta’s vocals but the whole band was on top form. I don’t doubt that they gained more than a few new fans that night. 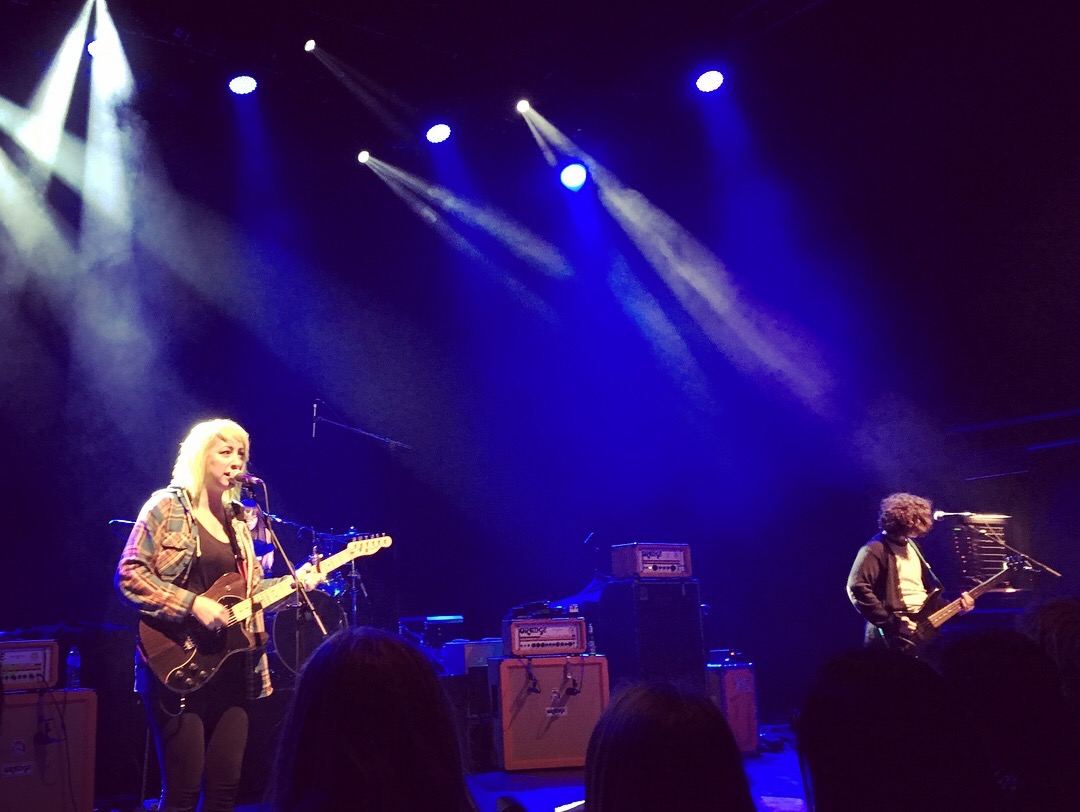 Up next were a band who are arguably headliners in their own right – there were certainly enough people there who were probably more excited to see them than The Menzingers. The band I’m talking about is of course Toronto-based foursome, Pup. Pup have become a band that have been much talked and raved about over the past few years and they’ve become particularly popular with the poppier of punk crowds, despite being a fairly raw punk band themselves. There was a certain hype surrounding them that Colin and I didn’t really get until we saw them live in 2016 – at least, I feel like I got it after seeing them live for the first time but I’m not convinced Colin did! Either way, I was definitely keen to see Pup for a second time. Opening their set with Doubts, the crowd, particularly those at the front (where we were), wasted no time in exuding some energy. These pop punk kids certainly have a lot of energy! Compared to my first time seeing Pup, I felt like their live performance was a little less raw and a little more polished – I’m undecided whether this is good or bad. That said, I’d say I enjoyed them more and more as they went on. Particular highlights for me were Reservoir, from their self-titled album, and the medley of If This Tour Doesn’t Kill You and DVP that closed out their set. Overall I really enjoyed watching Pup and I’m pretty sure I’d enjoy watching them again. We’d had two great performances from the support bands but I was now super excited to see one of my absolute favourite bands once more – The Menzingers. Opening their set with Tellin’ Lies wasn’t a great surprise. As After The Party’s opening track and with the huge singalong lines of ‘Where we gonna go when our twenties are over?’ this is the perfect set opener. The only thing more perfect was the next song, Good Things, which received an even bigger reaction – songs from On The Impossible Past always do to be fair. The Menzingers now have five full length albums, as well as a number of other releases, so when it comes to their live setlist it understandably features mostly their latest songs. However playing bigger venues, and therefore a longer set, means that they are able to throw in a few old favourites as well. The first of these at Shepherd’s Bush was A Lesson In The Abuse Of Information Technology from their debut album of the same name. I’m sure there were some newer Menzos fans who weren’t so familiar with this song but I certainly was and I went, well, a little crazy. I’d not realised how much I missed the swapping of vocal lines between Greg and Tom, as well as big harmonised choruses, until they played this song. It was brilliant. It wasn’t just the odd old song that had me pumped however, other set highlights included the massive sing/shoutalongs to Casey and The Obituaries, hearing relatively old track I Was Born and newer favourites Rodent and Your Wild Years. Greg made a point of mentioning that playing Shepherd’s Bush Empire was their biggest international show to date, as well as being After The Party’s first birthday, so this put a bigger emphasis on just how important this show was. Drawing towards the end of their set, there was further opportunity for singalongs with big crowd pleasers I Don’t Wanna Be An Asshole Anymore and Lookers. That wasn’t quite it of course as an Academy style venue calls for an encore. Just as Tellin’ Lies being the set opener wasn’t a great surprise to me, nor was the first song of the encore – After The Party. (Side note: There had been a fair few crowd surfers during the evening but during this song we spotted a familiar face in Hassan of Triple Sundae and On A Hiding To Nothing fame. It was nice to recognise someone amongst so many people!) As my favourite song of 2017, playing ATP was not a bad move in my book, in fact it was a great move. Even better was the transition into a cover of, ‘the only band that matters’, The Clash’s Straight To Hell. This is not an unusual cover for the band as it appears on their debut album but it was without a doubt a welcome addition to the evening. Straight To Hell, however, isn’t a Menzingers set closer. That honour fell to In Remission and gained one last sing song. Weirdly, someone appeared next to us brandishing a LED-lit crutch for the lines ‘If anyone needs a crutch then I need a wheelchair.’ Anything can happen at a Menzingers show, I guess! 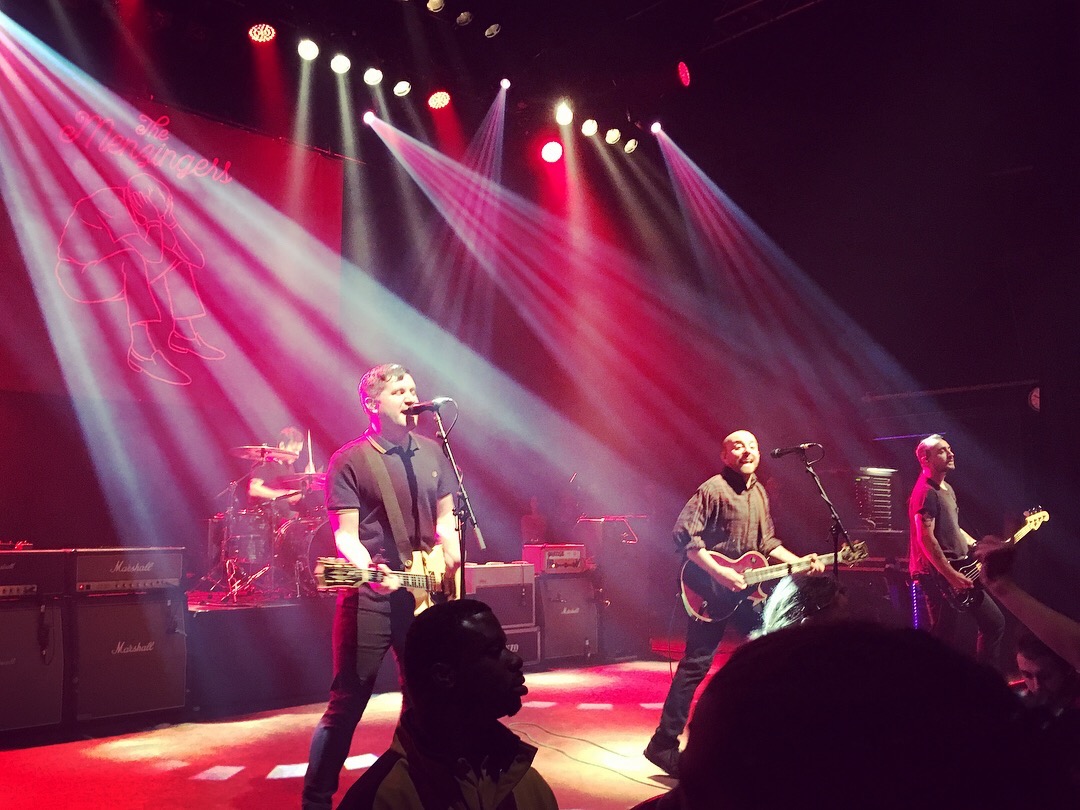 I’ve seen The Menzingers close to ten times now and I’ll admit that this wasn’t their best performance by any stretch of the imagination. Greg’s vocals were perhaps showing signs of not being at their best (my voice wouldn’t be either singing and screaming night after night) and you could just say ‘Hey, but it’s a punk show. It’s not meant to be perfect.’ but then that’s kind of a contrast with where they’re at now – playing bigger stages, to bigger audiences. Of course I would take a small underground pub show over another Shepherd’s Bush gig but I still had the best time watching my favourite band and singing along to some of my favourite songs in the world. I lost my voice at a gig for the first time in forever so that says it all really. It was a really great night.

If you missed The Menzingers this time around or are simply dying to catch them live again, rumour has it they will be back in August and playing alongside an even more killer line-up than this one – Lagwagon, The Lawrence Arms, Bad Cop Bad Cop and The Lillingtons. The gig will be at The Forum in Kentish Town on the 3rd of August but as far as we are aware tickets are not on sale yet. I’d snap them up as soon as they are if I were you.