You know when you're clicking around Spotify or Bandcamp and you discover your new favourite band? That happens to me quite a lot. It happened recently when I discovered a band named Dead Bars from Seattle. I listened to them religiously for a couple of weeks and then I had an email from the wonderful Gregory Lambrechts from Midwestern Anxiety asking if I'd like to review their new album Dream Gig. Of course the answer was yes! 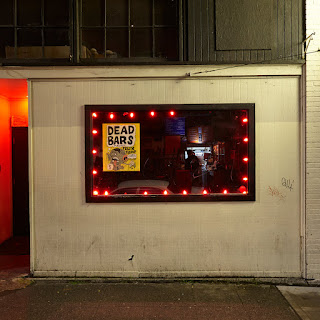 Dream Gigs opens up with Overture. This is an album introduction track that is just a simple piece of piano playing and it warms you up for the first proper track - Ear Plug Girl. The track begins with an instant sing-a-long moment that will immediately get the listener invested in the song. This gruff pop punk song tells the story of meeting a girl at a punk show who was kind enough to share her ear plugs with Dead Bars lead singer John Maiello. A fun and infectious way to kick off Dream Gig. Always Bet On Clark is another track that tells a story. I do enjoy a story based song. This song is about a trip to Reno, Nevada, and all the strange things that happened in the night. The moral of the story is that no matter what scrapes you manage to find yourself in, you can always count on your friend Clark to look after you. Maiello really stretches his gruff, crackly vocals on the track and gives it a raw and charming sound. The fourth track on Dream Gig is named Emergency. Emergency is a song about suffering with anxiety and panic attacks and crying out for help. Despite the gruff pop punk sound that Dead Bars play, there is a sombreness about the song. This is one of the highlights on Dream Gig. I imagine that there is a sense of catharsis about seeing Dead Bars play it live.

D Line To The Streamline has an introduction that hit me straight away. The guitar riffs along with the rumbling rhythm section allows Dead Bars to show what capable musicians they are before Maiello is back in story telling mode, weaving a tale about a night where he gets stuck out, not able to go home. Then about the wanting to go home but not wanting to be alone. D Line To The Streamline has a bit of a softer tone to it than the previous tracks but is still just as much an enjoyable listen. On my first listen of the sixth song, Face The Music, I knew this was gonna be a firm favourite of mine. I liked the structure of the song from the outset with concise sentences that will be incredible fun to sing live. I'm sure you've worked out just from the title of the track that the song is about realising some home truths about your life, that might not amount to anything, but then deciding to follow your dreams anyway. The lyrics "I Don't Wanna Face The Music, I Just Wanna Turn Around And Play Some Music" is quite an uplifting way to finish the track that for the most part is quite downbeat. The old switcheroo! Tear Shaped Bruise is the name of the penultimate song on Dream Gig. Tear Shaped Bruise is quite a sad song about not being invited to an old friend's wedding and feeling hurt by it. I thought the line about being in a mosh pit when the wedding is on and feeling like the elbow received to the head was from the old pal. Is it a theme for punks not to get invited to weddings? I'm pretty sure that Lagwagon's May 16 song is also on this topic. Both songs are fantastic. Dream Gig finishes with the album's title track. The biggest surprise about this was that it's over seven minutes long. Dream Gig is another uplifting song about persevering with what you enjoy and working hard in the hope you will make it in the end. The big dream in Dream Gig is to play a show with the mighty Bouncing Souls. ("My Only Goal Is To Play With The Souls"). I feel like this would be a set closer for Dead Bars with it's uplifting style and really long musical outro. Like I said, the song is over seven minutes long and the final four minutes of the song is all music, really winding up the album in style.

Despite only knowing of Dead Bars for a short while I was expecting big things from Dream Gig and I can honestly say it did not disappoint. It had that rough and raw sound that I love so much, whilst giving the impression that anyone can write music and lyrics and be in a band. That's what punk rock should be - all inclusive, anyone can get involved and have the best time. That's what I think Dead Bars are all about as a band. Their not reinventing the wheel but they are inspiring people to get out and play in bands and forget about all of life's problems and enjoy themselves. Great stuff!

This review was written by Colin Clark.
Posted by ColinsPRW at 12:11:00