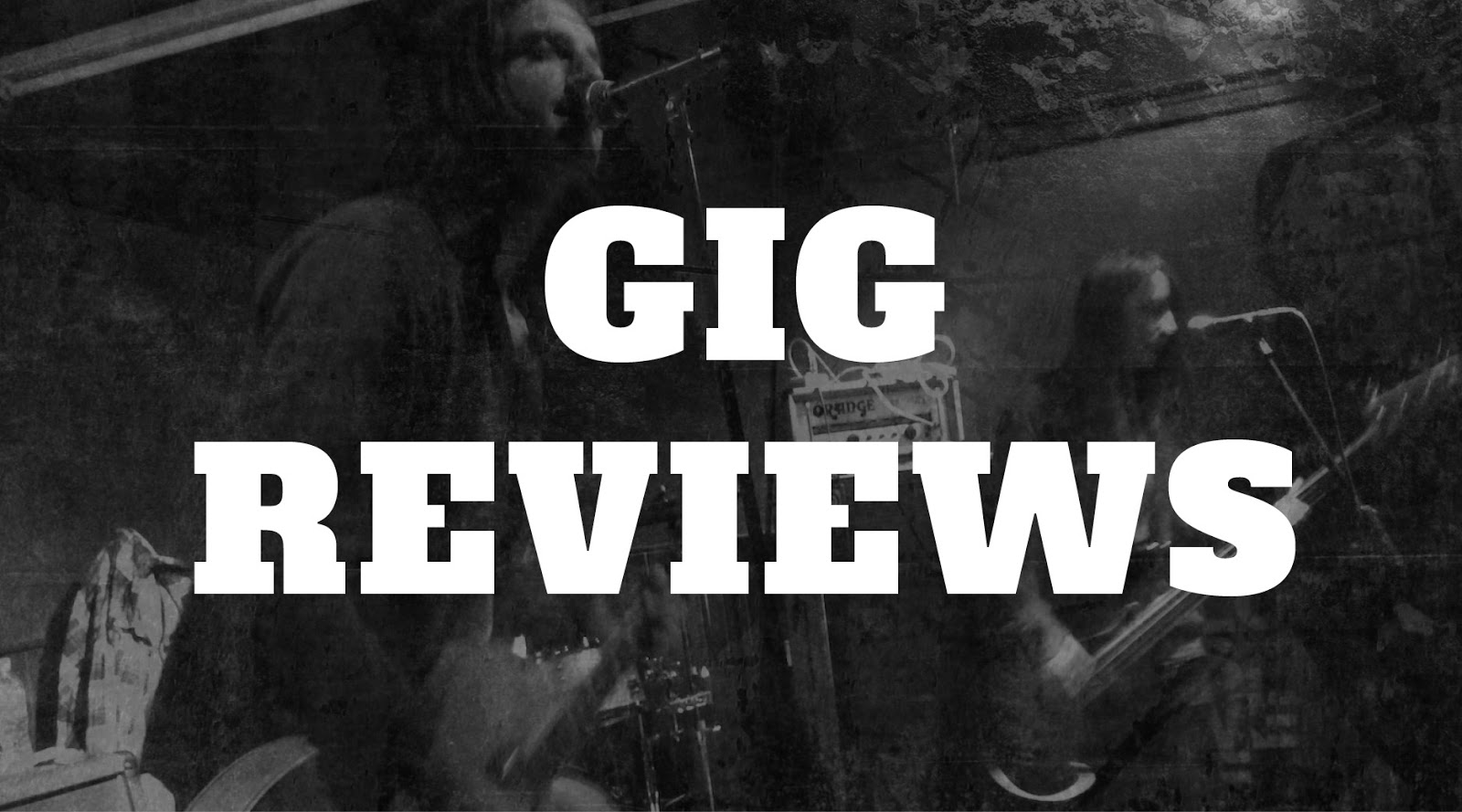 I woke up on the third day (my second) of Make-That-A-Take's Book Yer Ane Fest IX eager to crack on with another day of punk rock goodness. That was until I looked out of the window of my hotel room and discovered it was snowing quite heavily in Dundee. This made me retreat back to bed and decide to skip the day’s hardcore brunch featuring Skelped and Boak at Cerberus. Eventually I decided it was time I should brave the snow and, wearing two hoodies, I made my way down the slippery hill back to Buskers.

Dundee's Salem Street were the first band up on the final day of the festival. Avon had already suggested that I check out these boys before the festival had even started as she thought that I'd like them and she was definitely right. Clearly inspired by The Clash and Rancid, the four-piece started the day right with songs about growing up and not doing what is expected of you. They also chucked in a couple of covers - Bonzo Goes To Bitburg by The Ramones (my favourite Ramones song) and Knowledge by Operation Ivy. An excellent start to the day. Next up were another Dundee band, three-piece emo/punks Please, Believe. Please, Believe have a new fan in me, their jangly guitars combined with some excellent gruff vocals make a really interesting sound and I'm looking forward to them actually recording something so next time I see them I can sing along. 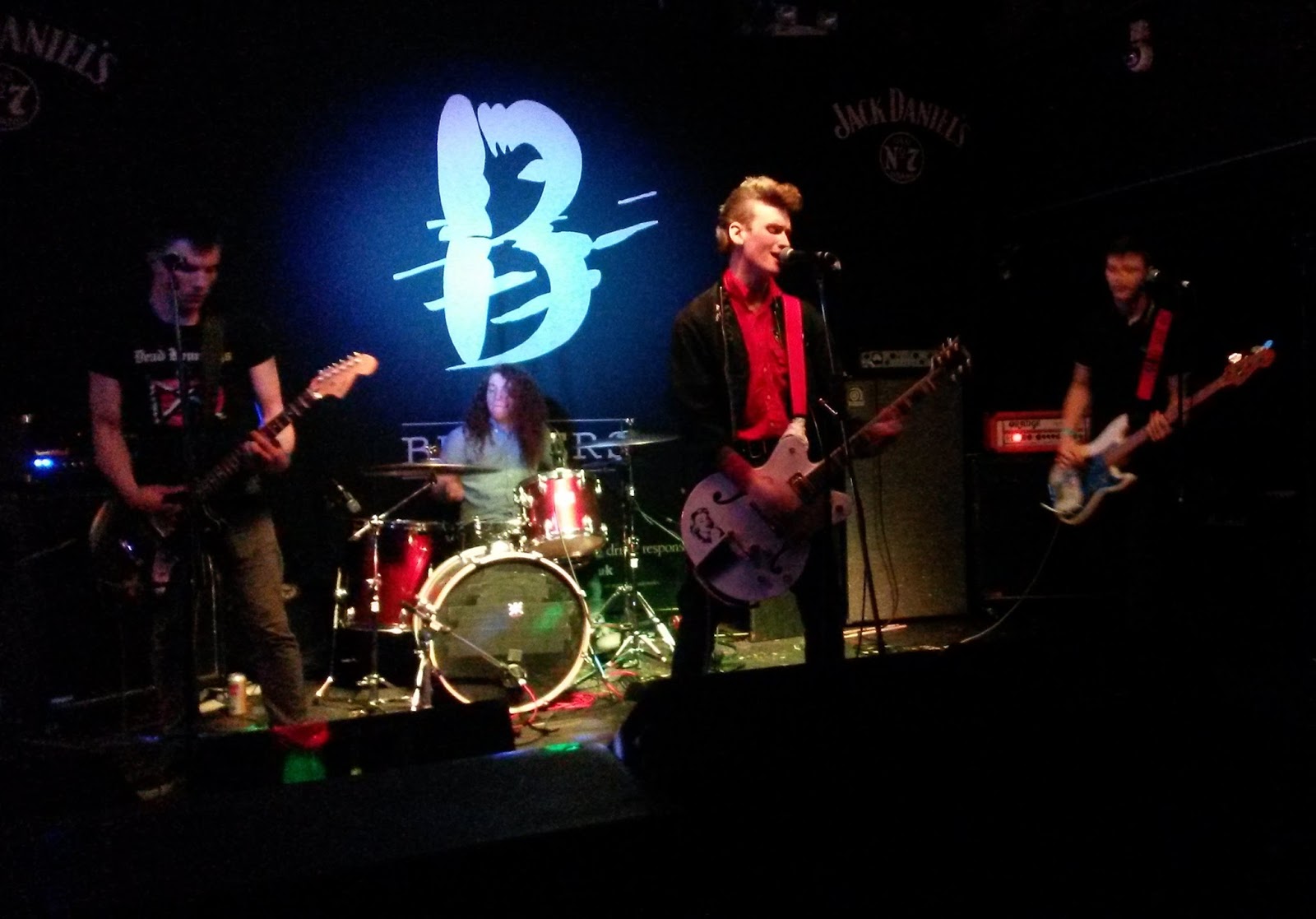 After Please, Believe finished their set it was announced that today's headliners Above Them had pulled out. On a personal note this was annoying as it also happened when Emma and I were supposed to see them at Manchfester back in October. On a more general note, it  had me confused for the rest of the day with set times so I was just sort of winging it going back and forth between Buskers and The Vestry throughout the day. Because of Above Them's no-show Slowlight were moved to Buskers after being due to open Vestry and were on next. Slowlight are a four-piece post hardcore band from Glasgow that features male and female vocals. Slowlight had a little difficulty with the equipment not working properly for them but managed to plough through their set regardless. The harmonies from Colin and Beth in particular were a highlight for me. Next I made my way to The Vestry for the first time that day to see Brendan Dalton. Another artist I've never heard of before, Brendan is a singer/songwriter from Perth with a voice that can break your heart. It may have been because I was tired but I actually found myself getting a little choked up during his set, which also included a magnificent cover of the Nirvana classic Smells Like Teen Spirit. 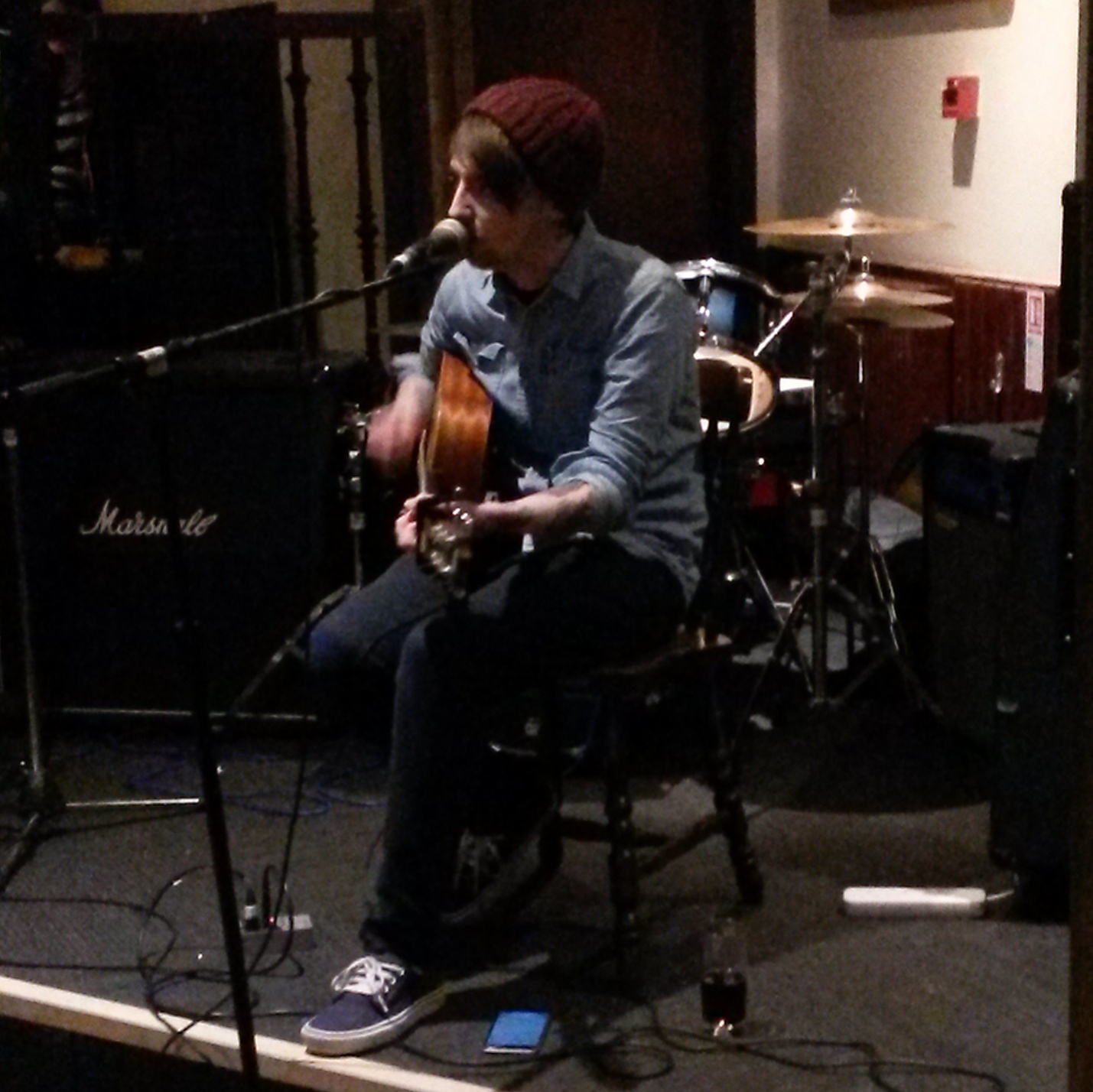 Up next it was one of my most anticipated bands of the day - Elk Gang. Avon is good pals with the band and has been raving to me for a while about how good they are. On the Saturday she introduced me to Kevin and James from the band who are really good dudes. I was expecting them to be good but I was amazed at just how good they actually were. Playing melodic hardcore skate punk, Elk Gang gave the day a real adrenaline shot in the arm and really picked the pace up. These chaps have really made something special and I can't wait to see them get bigger and bigger. This show was also a bit of a bittersweet show for the band. It was their first time playing BYAF but their last show with temporary bass player Mark from Get It Together (who sprayed the crowd with silly string at the end of the set!). After Elk Gang I was starving so popped out for some food but when I came back I managed to catch the end of Aberdeen based band Lenin Death Mask. These experts in noisy indie punk rock were one of the surprises of the weekend for me. I had heard them before and enjoyed them but it's clear that it's best to experience Lenin Death Mask Live. The complicated guitar riffs and the gruff shouty vocals work so well together. 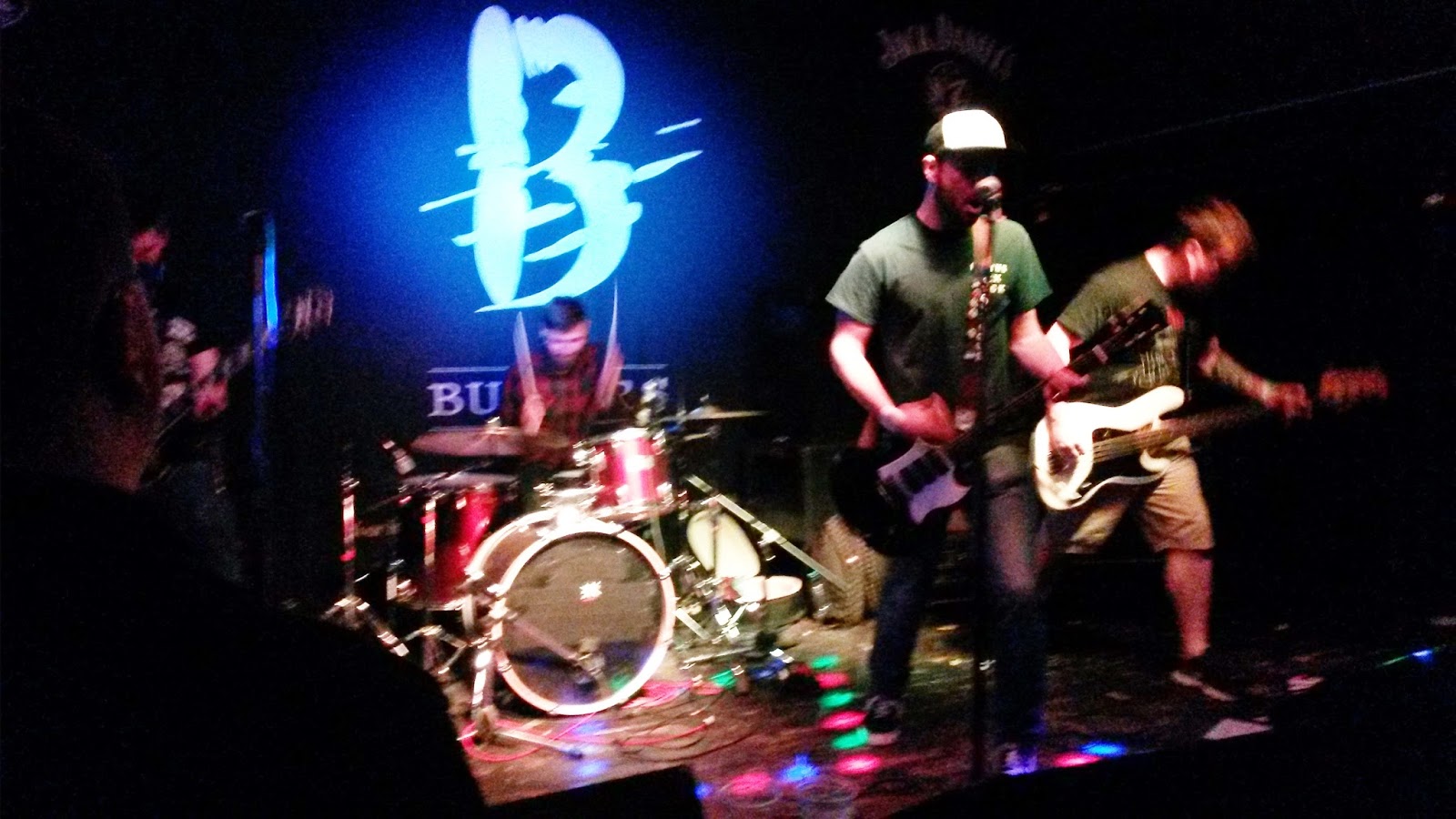 Bettie Akkemaai was next up down in The Vestry. Bettie is an anarcho folk punk from Den Bosch in the Netherlands. As she took to the stage she commented on the lack of women playing at the festival (something I had also noticed) and that she was proud to be one of the few to do so. She was very endearing on the small stage, playing honest acoustic music about feminism, community and life as a musician using witty and intelligent lyrics. Next up were a band I'd been listening to quite a lot recently, Robot Doctors. This five-piece from Dundee play some of the best melodic punk rock music I've heard in a long time. They were fantastic as a live band too, seemingly super casual on stage between songs but really rocking out during their songs. The band makes the most of having five members and they have some excellent harmonies in their songs. A great band to keep an eye on. 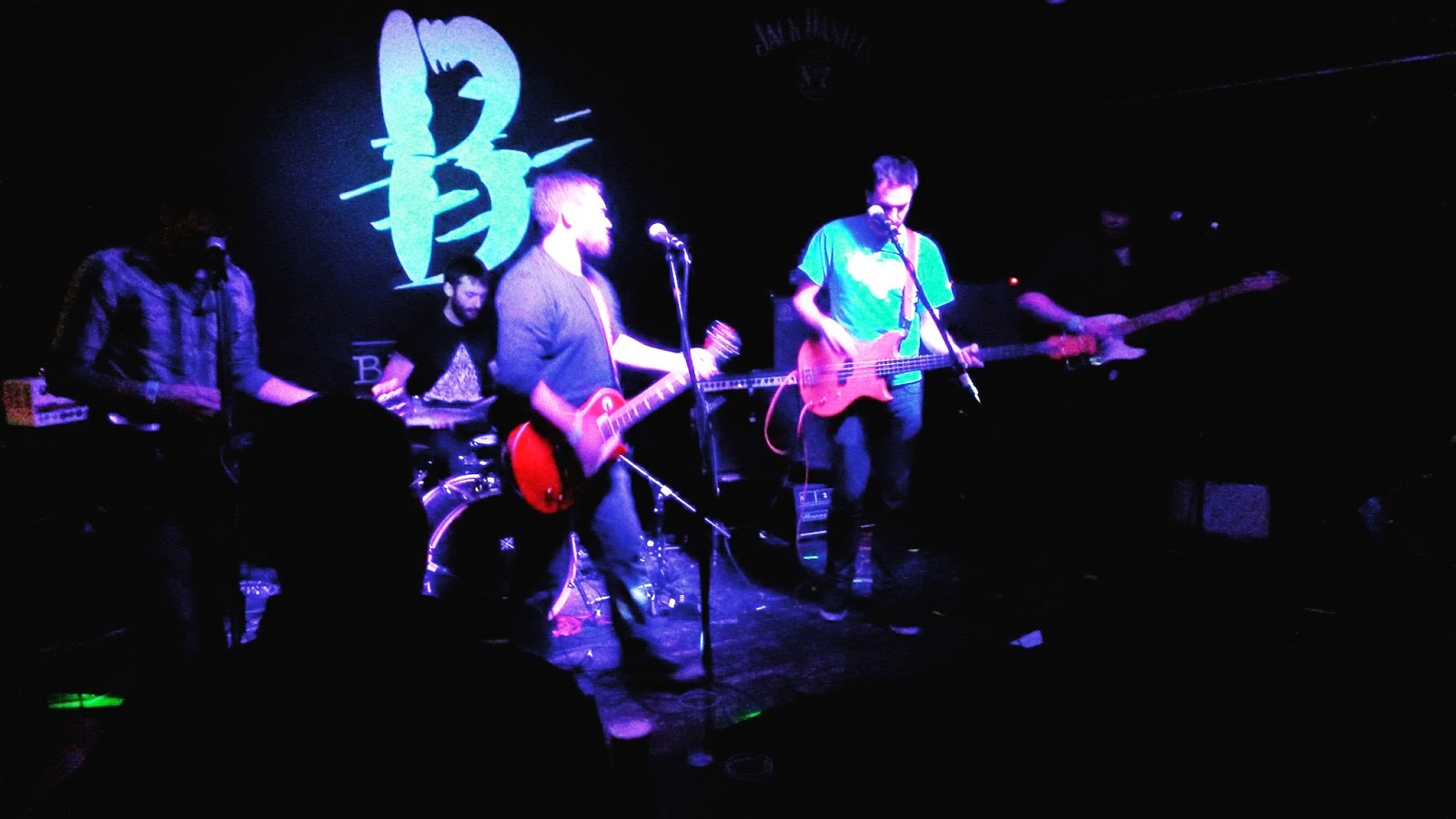 Another band I've been listening to a lot lately is Edgarville from Blackburn. The duo have just come back from a three month European tour with Terrafraid. I'd had a message from Ed from Edgarville asking for a review of their upcoming album Fingerprints and Handwriting. I had listened to the album and really enjoyed it so was looking forward to hearing some of it played live. Ed has a very unique voice I'm not that used to hearing in an acoustic act, it's a booming, gruff style of vocal that keeps Edgarville sounding like one of the most original bands in the scene. Up after them were a band I was super excited for; all the way from Denmark - Forever Unclean! Their EP Shreds is one of the best things I've heard all year. Seeing them live reminded me of everything I love about punk rock music - it was, fast, fun, passionate and full of energy. This was the first time in the day that I could really sing along with a band and I really made the most of it. Everyone around me seemed extremely impressed with these three Danish gentlemen and they without a doubt gained some brand new fans. Back down in The Vestry were another Dundee band, Stonethrower. Stonethrower, who have Ross from Please, Believe in the band, were using their set at the festival as a release show for their new EP Swells/Repels. After a little delay (due to an AWOL drummer) Stonethrower launched into a set of technical punk rock music featuring vocals from three different members of the band, which is always nice to hear. 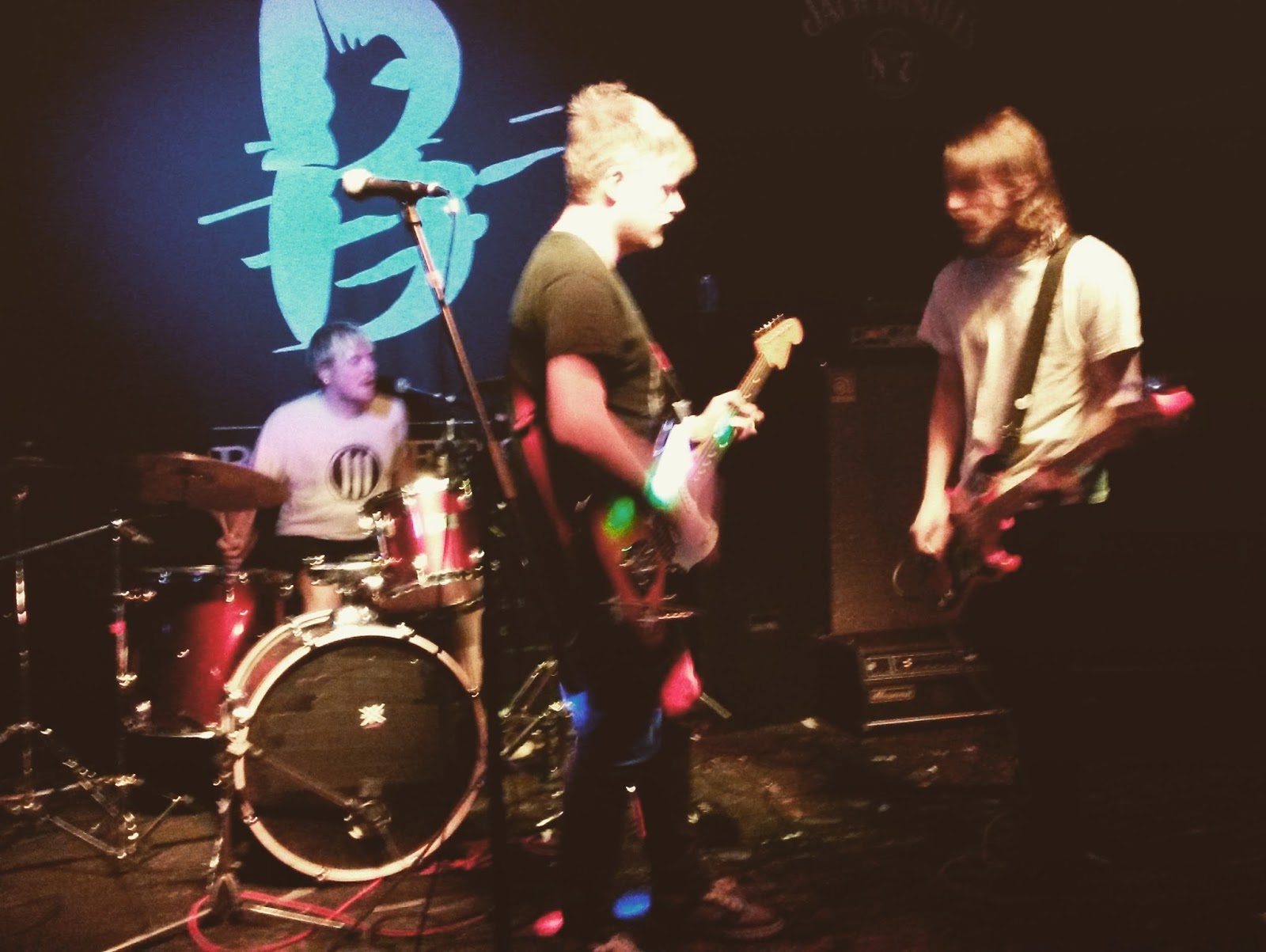 You don't often find a lot of instrumental bands in the world of punk rock but as I went back upstairs to Buskers Dundee's Shitgripper were in full flow. They were honestly like no band I've ever seen before. Their dark, hard, experimental punk rock sound was so intense and had the room full of people engrossed. They are definitely a band that have to been seen to believed. Following Shitgripper were Terrafraid, returning home after a three month tour of Europe with Edgarville. I only stayed for a couple of songs for this four-piece indie/pop punk/emo group as I wanted to make sure I had a good spot for what was next but I was so impressed with Terrafraid. The UK emo scene is getting bigger and bigger at the moment and Terrafraid have to be placed at the top of the list of best bands in the genre. 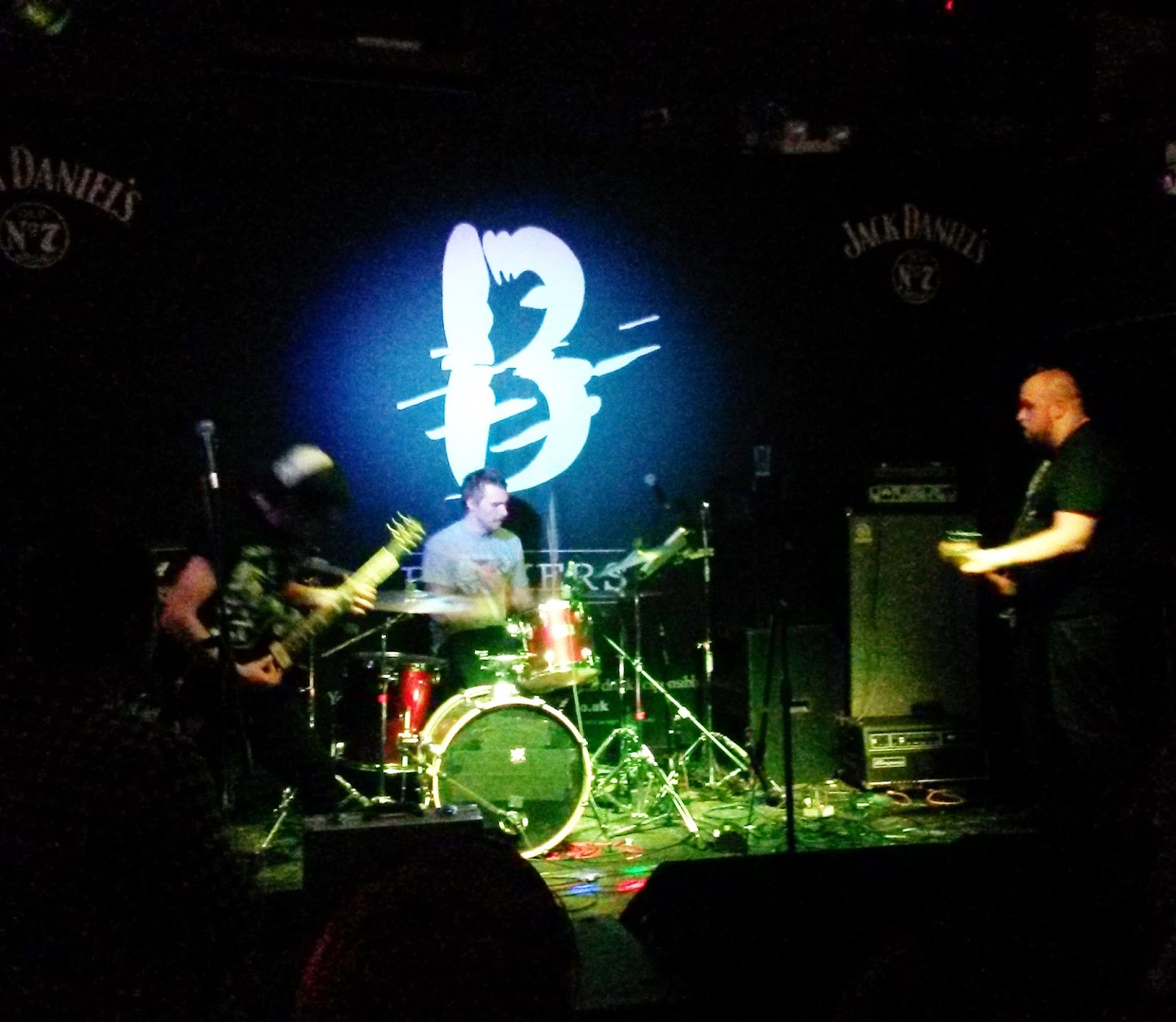 After a couple of Terrafraid songs I made my way back down to The Vestry for what I was considering the headline act for Sunday: every punk’s favourite angry Scot - Billy Liar. Billy plays honest acoustic punk rock music songs about all aspects of life. Whenever I've seen Billy play live it's almost felt like he's playing like it's his last ever show as he puts every ounce of energy he has into his set. This night was no different; he decided to start his set slightly earlier than he was supposed to, joking he was going to play a warm up set for himself. Quite the showman he entertained the crowd with a combination of excellent songs and hilarious stories including a tale about a cease and desist letter he received from David Hasselhoff's lawyers and a funny story about the Edinburgh festival he may or may not have stolen from Paper Rifles. Speaking of Mr Paper Rifles, Jon joined Billy on stage for a couple of songs from their upcoming charity single. Billy Liar and Paper Rifles are both fantastic solo performers but working together they were absolutely brilliant. They were a real highlight from the whole festival and will be something I remember for a long, long time. 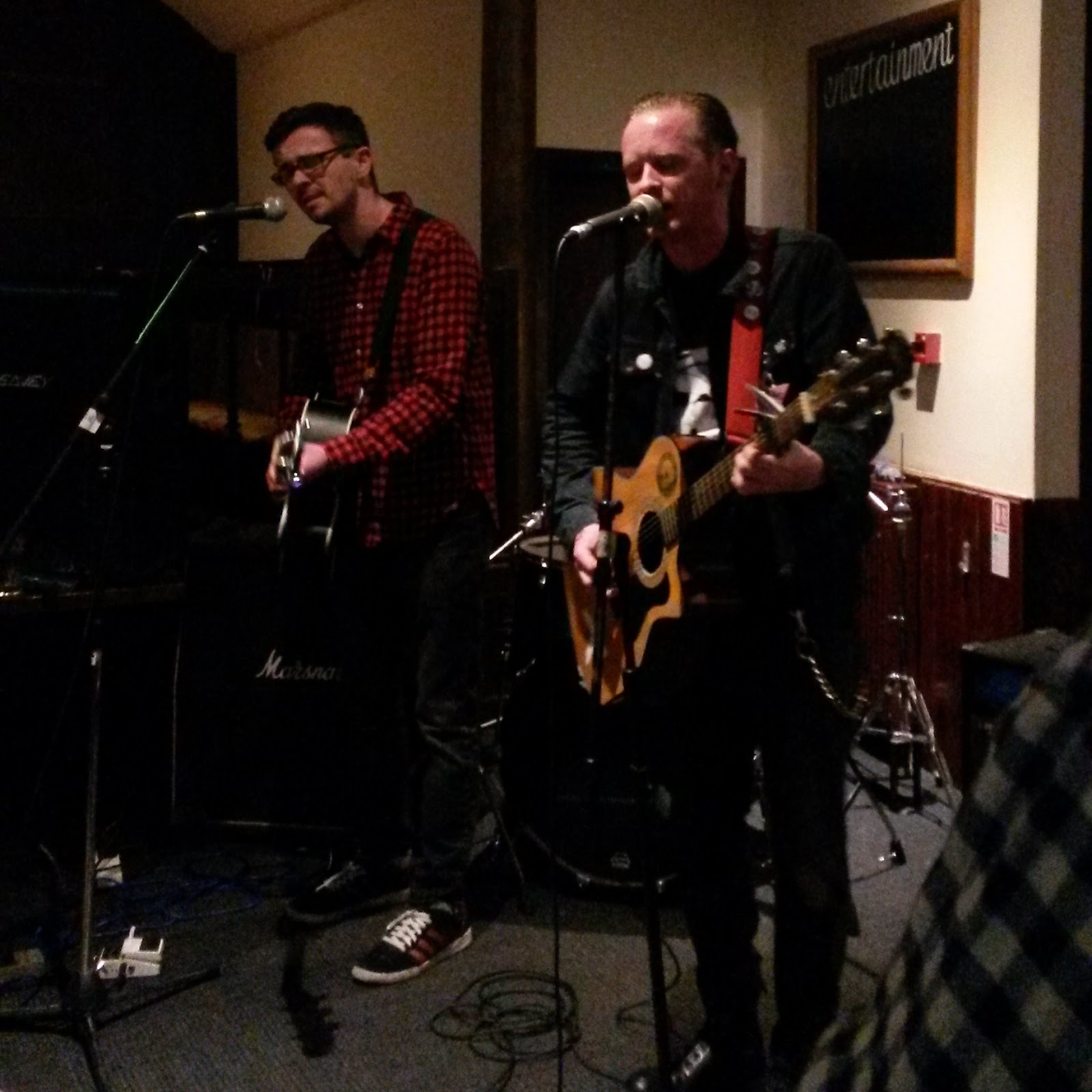 The penultimate band at BYAF were WOMPS. WOMPS are a three-piece indie punk band who hail from Glasgow. The crowd felt a bit smaller now, I guess a lot of the crowd left after Billy Liar as it had started to snow again, but the people who were left really seemed to dig WOMPS. Like every band, a lot of energy and passion was put into their performance and this transferred into the crowd as they too showed a lot of enthusiasm for the band. Finally the time came for the final band of Book Yer Ane Fest IX - Kaddish. This was Kaddish's ninth time in a row playing the festival so it was kind of fitting that they closed the festival. Kaddish are a three-piece hardcore punk band from Dundee who were worshipped. The folk down the front of the crowd were in full-on head-banging mode, really enjoying the final moments of the day. It's great to see a long-running band still enjoying playing gigs and having fun doing it. 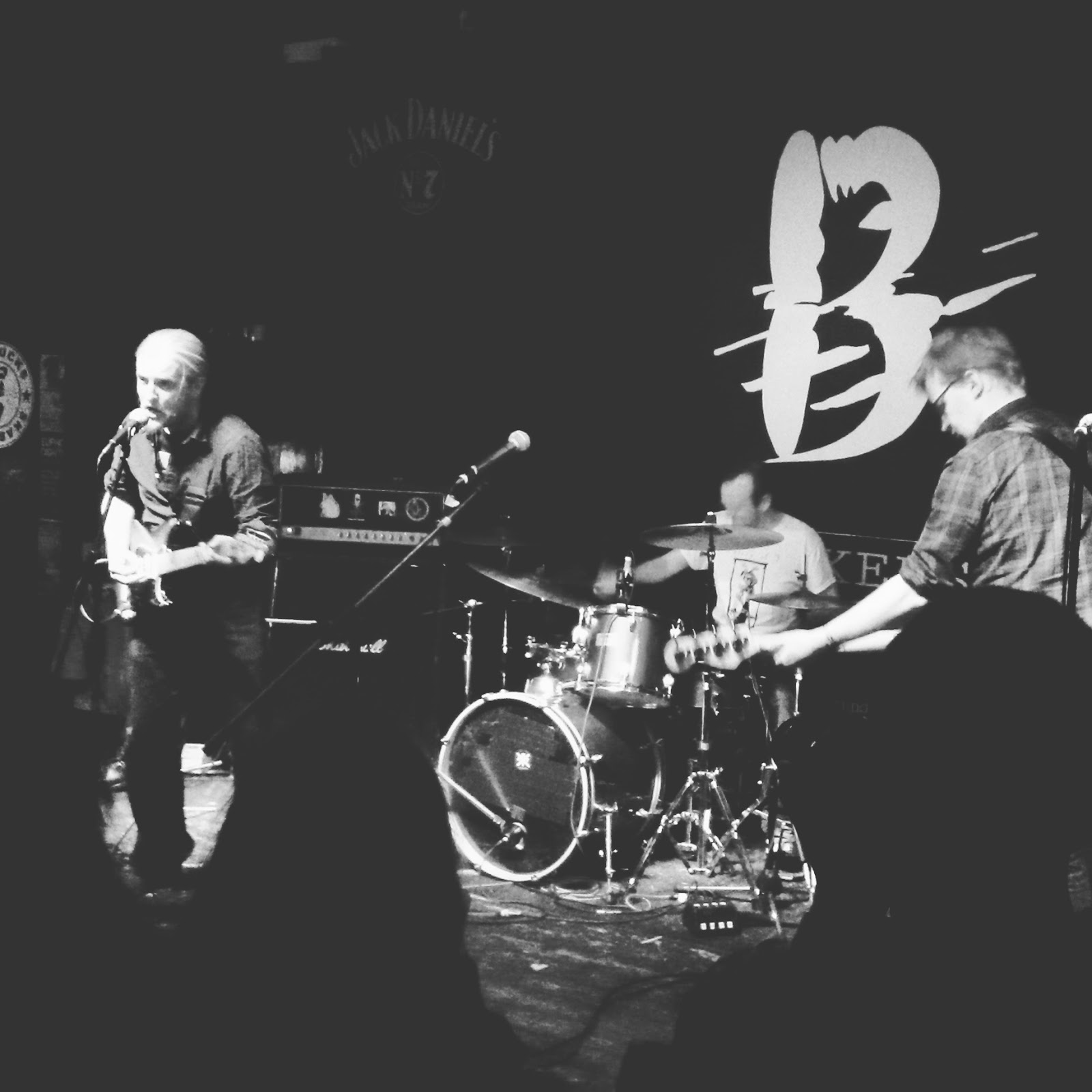 Book Yer Ane Fest was absolutely amazing and one of the best weekends away I've had all year. Everything about the weekend was excellent; the bands were fantastic, the whole event was brilliantly organised (something that must have been incredibly tricky to do) but most of all everyone was incredibly friendly and welcoming. From Avon introducing me to various members of bands to Deeker, leader of Make-That-A-Take Records, coming and saying hello to me, I didn't meet a single person that I didn't like. After being at a Frank Turner gig the night before I left for Scotland that was full of idiots this was a very welcome change. Brendan Dalton said something during his set that really stuck with me. He said that punk rock isn't just a genre of music but it’s also a family. A very true and poignant quote.

My holiday to Book Yer Ane Fest was also a bit of a personal triumph for me. Going to Dundee is the furthest I've ever been from home and the fact that I did it by myself was a big achievement for me. At the beginning of this year I was having some serious issues with depression and anxiety and it got to the point where I didn't go to many shows at all, especially if I was going by myself. I'm quite proud of how far I've come on my journey to get better. Punk rock has helped so much. Thank you punk rock!
Posted by ColinsPRW at 08:17:00