The Lockdowns are a new band from Houston, Texas. I’m guessing, from their name, that they formed during 2020 due to being locked down because of that awful pandemic. In January, the four piece released their debut self titled EP. It contains six broken hearted pop punk songs that remind me of Teenage Bottlerocket at their best. 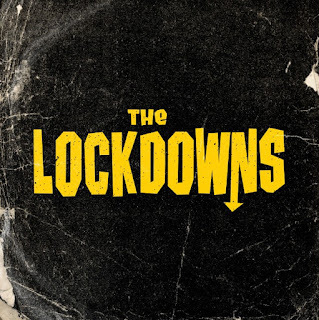 The EP begins with the song Dirty Mouth. The track gets the EP off to a flying start with some buzzsaw guitars and an energetic drumbeat before some rapid-fire vocals come into play. The Lockdowns fly through the first verse before hitting the chorus. As you would imagine from a pop punk band, there are some great moments for singing along here. The track is about using bad language and being offended by it. The whoa-ohs in the song remind me of one of my all time favourite bands, The McRackins. Next up is Baby Can I Change Your Mind. After the energy of Dirty Mouth, this song really slows down and has a 60s doo-wop style to it. I loved that The Lockdowns decided to change things up like this so early on in the EP. The vocals are another big high point on the song. I’m not sure if there are two singers or the singer just changed octaves but the switch to the higher pitch is a thing of beauty. The third song is Duck Tape And Super Glue. Beginning with an audio clip basically saying that when you love someone you should give them all you have, from there we move into a song about getting your heart broken again. The band brings the tempo and energy back up on this track, despite it being quite a sad song. Vocally the lead singer settles on a raspy style that I really like. It gives the song a bit of bite rather than being too sugary sweet.

In the intro for this review I mentioned being reminded of Teenage Bottlerocket on the EP. The fourth song, Skeletons, is the perfect example of this. The opening has a heavier sound than anything previous and as soon as the vocals come in I think of Kody Templeman. He’s one of my favourite singers so I’m all for this. The lyrics do that wonderful thing of painting a great picture of what the song is about. I’ll leave you to listen to work out what’s going on. The penultimate song is titled Maybe I’ll Fall In Love With You Tomorrow. This was one of my favourites on the EP. There’s a breezy, summer time, uplifting feel to the song that puts a smile on my bearded face. The introduction of the song sees the bass become quite prevalent which I thought added a great extra layer to the track. On first listen, it felt like a positive and hopeful song but when you listen again the track is about building walls around yourself, trying to ensure that you’re not going to get your heart broken again. The sixth and final song on the EP is Monsters. It starts out with a fantastic building introduction that lets you know that big things are on the way. It also infuses you with enough energy to get your through the rest of the EP in fine fashion. There’s this superb urgency in the vocals that really pulled me in. Monsters is about having children and, despite it being very difficult at times, them meaning everything to you. I don’t think I’ve heard a song touching on this subject in a punk song in a long time and it’s a really refreshing way to end the EP.

This is a fantastic pop punk EP. I love this sound and always look forward to discovering new bands playing the style. If you’re a fan of Teenage Bottlerocket, The Lillingtons, Dear Landlord, The Copyrights etc. then The Lockdowns are really worth your time.
Stream and download The Lockdowns on Bandcamp here.
Like The Lockdowns on Facebook here.
This review was written by Colin Clark.
ColinsPRW at 13:22:00
Share