Album Review: It's Not Me, It's You by Lettermans

Lettermans are one of the most exciting new Ramonescore bands in the scene at the moment. The Philadelphian four piece were due to have a big 2020 with a performance at The Fest in Gainesville alongside the release of their debut album. Unfortunately The Fest didn’t happen but they did manage to get their album out. Titled It’s Not Me, It’s You, the album promised a lot… but did it deliver? 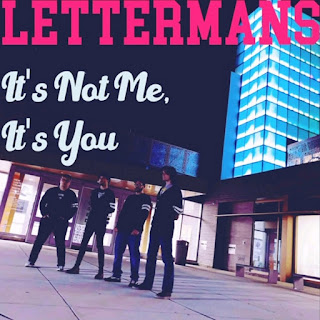 The eleven track album begins with Lady Of The Night. This is fun introduction of what to expect from Lettermans on this album. Melodic pop punk with Beach Boys-esque harmonies. There’s a no thrills approach to the song which is something I always find endearing about this style of music. It’s an homage but never feels dated. Up next is How Could She. This song is about finding the girl you think is perfect for you but things starting to unravel and then struggling to move on. The band do a fantastic job in telling the story here and the track plays out like a mini-film. I can imagine a film or TV show following this storyline. On the third song, To Be A Gentleman, lead singer Robbie Letterman ups the tempo on his vocals and carries a lot of the melody. I always enjoy when the vocals and music seem to have their own separate melodies, I think it creates such an interesting sound. The track is about doing all you can to behave in an appropriate and respectful manner but being enticed into behaving otherwise. Lyrically the song, again, paints a great picture. Continuing the theme of girls and relationships, Make You Mine is about trying to convince someone to date you. On my first listen of It’s Not Me, It’s You, this was one of the stand out songs. The vocals are delivered in a lovely punchy way and the chorus (as you might expect) is wonderfully catchy. The backing harmonies that are sprinkled throughout the song add a fantastic extra dimension.

The fifth song is titled Thank You Brian. The theme of the song remains about girls but also touches upon mental health. The song explores the doubts that your brain can create when you meet someone you like. Will they like you? Will they understand you? Can you let yourself go again? I’m sure these thoughts fill plenty of people’s minds when they meet someone they like so it’s a very relatable song. The song also touches upon the fact that music can help with your mental health, on this occasion the Lettermans thank Brian Wilson for showing them how to love again. Pretty New Girl ensures that the flow of the album remains consistent. The chorus was the stand out with the back and forth vocal style and the use of gang vocals. The song is about crushing on a new girl and eventually getting your heart broken by them. Wednesday On The Weekend sees the introduction of some keys or synths to Lettermans sound. It was really smart to place this song at this point on the album and it offers something new and prevents the album becoming too samey. There are a lot of great harmonies on the song that really fill it out and it’s definitely a track that will get stuck in your head very quickly, particularly the chorus. Up next is the album’s title track, It’s Not Me, It’s You. I always feel like if a band chooses a track name for the album title it needs to stand out. This is the case here. The song starts slowly with Robbie’s vocals opening the song before the full band come in. This is a track that whilst being very good, I did very much feel like they could have made it bigger in some way or another. Perhaps with the addition of more gang vocals on the chorus? I do love gang vocals.

I Will Never has a nice rock ‘n’ roll feel to it which shows another string to Lettermans bow. I really liked the way the intro builds into the vocals – they hit at the exact right moment. Lyrically the band again do a fantastic job of painting a picture, they really have a knack for this. The use of a higher pitched guitar tone gives the song an interesting and unique feel – I don’t really hear that many bands using that tone. The penultimate song is titled Surf’s Up. I’m reviewing this album on a cold December evening but this track transports me to a lovely summer’s day at the beach. It’s an uptempo and catchy song about the joys of having a party at the beach. It’s one of the happier songs on the album and left me with a great big smile on my face. Hopefully beach trips will be a thing we are able to enjoy in 2021. This song could be the soundtrack for the road trip there. The final track on It’s Not Me, It’s You is One Of A Kind. The song starts in a big way. When the vocals come in, there is an upbeat yet methodical style to the song. The guitars and drums chug along whilst Robbie croons over the top of them. The song is basically a love letter to the latest women he’s fallen for. There is definitely more emotion in this song than in any of the previous ones, perhaps ending the album with a more uplifting moment of finally finding the one that lasts?

It’s Not Me, It’s You is a very strong debut from Lettermans. They are without a doubt a band with a lot of promise and this shows why they got a spot of The Fest line up. I really enjoyed the way the band are able to paint a picture with their lyrics as it really puts you in their shoes as they sing the songs. If you’re into bands such as The Riverdales, Groovie Ghoulies or The Apers then you can do a lot worse than checking out Lettermans.
Stream and download It’s Not Me, It’s You on Bandcamp here.
Like Lettermans on Facebook here.
This review was written by Colin Clark.
Posted by ColinsPRW at 12:30:00